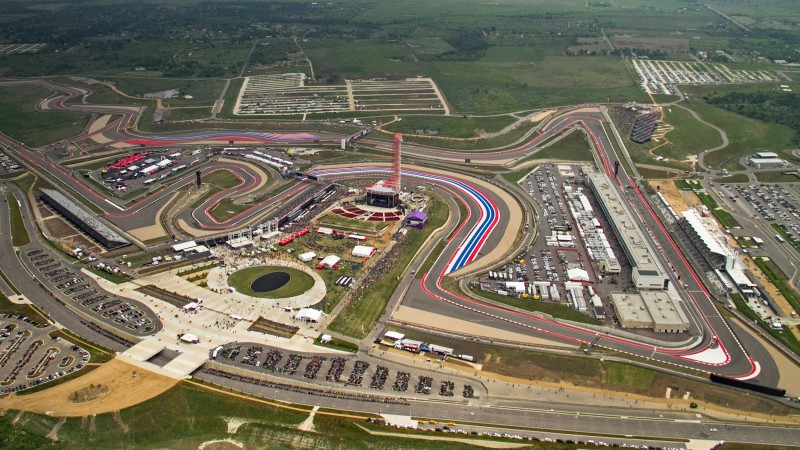 As the paddock prepares for the race at the 5.5 km Circuit of the Americas, there are a number of talking points on everyone’s lips with fans wondering if it could possibly get any better after an incredible opening round under the floodlights in Qatar. It is the third year in a row that the MotoGP™ World Championship returns to COTA, with Honda having completed a 1-2 (Marquez and Pedrosa) at each previous race.

Ducati confirmed that they are “back” in Qatar, completing the reversal in the Italian manufacturers fortunes since Luigi Dall’Igna joined the factory team as Sporting Director from Aprilia at the end of the 2013 season. The new GP15 showed that it was not just a “one-lap wonder” on the softer tyre option and Dovizioso will fancy his chances after he claimed his first podium for Ducati in Austin last season. One change for the Ducati Team and Pramac Racing, is that they will now have to make do with 22 litres of fuel as opposed to 24, after achieving three podiums in the last two seasons.

Valentino Rossi was the focus of the world’s media after taking a spectacular race win under the floodlights at the Losail International Circuit. Can Rossi produce the same in Austin? There is no doubt that the nine-time World Champion still has the same hunger for success as when he made his World Championship debut 20 years ago, although his best finish in Austin is a 6th place back in 2013.

Rossi’s teammate Jorge Lorenzo had to make do with 4th in Qatar, after he experienced an issue with his helmet that ruined his chances for the win. The Spaniard had actually led the race at times and was dicing with the Ducati’s until the problem, but believes he can be battling it out for the race win in Austin where he has a best place finish of 3rd.

Repsol Honda’s Marc Marquez got his title defence off to the worst possible start in Qatar, when he ran wide at the very first corner, eventually finishing the race in 5th. Marquez will be confident he can respond in Austin having won the previous two races held at the circuit. In fact the Spanish rider actually left COTA last year having topped every practice session, qualified on pole, and led every lap of the race on the way to his win, setting a new Circuit Record in the process.

Dani Pedrosa confirmed he will miss the Austin & Argentina GP’s due to the arm pump issue that he revealed after the Qatar race, which has been affecting him for the past year. Hiroshi Aoyama, who filled in for Pedrosa before at the Dutch TT in Assen in 2011, will replace the Spaniard. HRC test rider Aoyama has 64 races under his belt in the MotoGP™ class, and finished 12th last year in Austin on the Aspar Honda RCV1000R.

Suzuki made their return to MotoGP™ in Qatar, and as to be expected there were some teething problems for the Japanese manufacturer, with both Aleix Espargaro and Maverick Viñales down on power compared to their rivals. Team Suzuki Ecstar have never raced at COTA before, as the track was added to the MotoGP™ calendar after the Japanese manufacturer left the class in 2011.

CWM LCR Honda’s Cal Crutchlow won the battle of the satellite riders during the first round, finishing 0.5s ahead of his compatriot Bradley Smith on the Monster Tech 3 Yamaha. Crutchlow crashed out of the Austin race last year, but in 2013 he managed a creditable 4th place. These two look set for a season long battle and it should be close once again as Smith also seems to like the track, finishing 5th at COTA last season as the leading Yamaha. His teammate Pol Espargaro should also be in the mix having only lost out to the British rider by just 0.1s in Qatar.

Expect to see more from Scott Redding on the Estrella Galicia 0,0 Marc VDS Honda RC213V after he crashed out on the 2nd lap of the Austin GP last year, plus don’t forget the Pramac Racing bikes of Yonny Hernandez and Danilo Petrucci which once again could perform well in qualifying as they make use of their softer tyre option.

Avintia Ducati’s Hector Barbera was the top Open class rider at Losail, although he should face a tougher fight from German Stefan Bradl on the Athina Forward Racing bike this time around, with the German taking 4th at COTA in 2014.

CWM LCR Honda’s Jack Miller will be hoping to improve his fortunes after he crashed out of his MotoGP™ debut in Qatar, and he has tasted success at COTA before having won the 2014 Moto3™ race in Austin from pole position.

One man who will be looking for a good result in Austin is Aspar MotoGP Team’s Nicky Hayden who will be his starting 200th MotoGP™ race in front of his home fans, with his previous best finish at the circuit being a 9th place two seasons ago.

The Red Bull Grand Prix of the Americas takes place between 10-12 April, with practice on the Friday, qualifying on Saturday and the race on Sunday.

A dramatic season opener at the Commercial Bank Grand Prix of Qatar saw the race favourites encounter serious problems during the race.

Johann Zarco, Sam Lowes and Tito Rabat had set the pace throughout the weekend in Qatar but all had major problems come the race, with the latter two unable to finish. Austin was not kind to either Zarco or Lowes last year as both riders were unable to finish. The pair did have reputation for crashing but look to have changed that with a change of team and bike for Zarco and bike upgrades for Lowes.

2014 Moto2™ World Champion Tito Rabat and his Estrella Galicia 0,0 Marc VDS team showed strong race pace throughout the weekend and will be confident heading to Austin, a track that has seen Rabat claim two second-places from two starts. Meanwhile rookie Alex Marquez will be continuing to learn the Kalex machine and will be looking to recreate the exploits of his Moto3™ World Champion predecessor, Maverick Viñales, who claimed victory in America on his debut last year.

Surprise Qatar race winner Jonas Folger will carry this confidence and the Championship lead to the Circuit of the Americas where he will once again chase a strong podium finish. 2014 saw Folger struggle with pressure after a decent early season showing but spent much of the off season focusing on handling pressure and adjusting his mentality, Austin will offer a good test of his mental strength.

Teammate’s Thomas Luthi and Dominique Aegerter will focus on continuing to learn their new Kalex frames after nearly all winter tests were hindered by rain. Both the Swiss riders had positive races in America last year and Luthi will be looking to continue his podium run after a solid third. Aegerter’s adaption to the Kalex has not been as smooth, the former race winner finishing 15th last time out. However, a third at COTA last year should provide hope for a change in fortunes.

One of the stand out performances of the opening round was Alex Rins who has gelled quickly with the Moto2™ bike, able to fight from ninth on the grid to fourth. The former Moto3™ front-runner has proven he is strong over race distance but will be looking to qualify on the front two rows to ensure he can fight with the leaders from the beginning.

A return to a more standard practice and race schedule should benefit all Moto2™ riders and allow them to explore more set up options.

After a stunning race at the Commercial bank Grand Prix of Qatar for the season opener, the Moto3™ class heads stateside for round two.

Last year KTM machines filled the top two steps on the podium with Efren Vazquez putting his Honda in third. After a Honda podium lockout in Qatar, KTM will be eager to secure their first podium of the year after fighting for the Championship with Jack Miller in 2014.

Qatar saw Alexis Masbou take the first pole position of his career and just his second victory; the SAXOPRINT RTG rider will be hungry to continue this form and cement himself as a title contender during his final year in the Moto3™ class – and teammate John McPhee who took fifth in Qatar will be eager to continue that kind of good form.

Fellow Honda rider Enea Bastianini claimed his first World Championship points in Austin last year, and after a stunning ride from 21st on the grid in Qatar to second he will no doubt be a threat regardless of Qualifying results.

Mapfre Team Mahindra’s Francesco Bagnaia and Red Bull KTM Ajo’s Brad Binder both finished as the top Mahindra and KTM in Losail, but will be eager to improve on results that both admit were disappointing. Binder’s teammate, Miguel Oliveira will also be out to improve after a first corner collision saw him finish outside the points despite being a favourite for the win.

Romano Fenati has a point to prove in Austin after a disastrous season opener, failing to finish the first race. The young Italian in the SKY Racing Team VR46 outfit finished second in Austin, but so far has struggled to show the pace of last season.

Impressive rookie Fabio Quartararo and his Estrella Galicia 0,0 teammate Jorge Navarro showed strong pace under the floodlights and will be eager to get another new circuit under their belts.

Stefano Manzi will make his Grand Prix debut for the San Carlo Team Italia Team after being too young to race in Qatar. Ana Carrasco also looks to return to action after missing the season opener with a broken collarbone.