John sets aside weekend’s frustrations to finish 6th in Austin 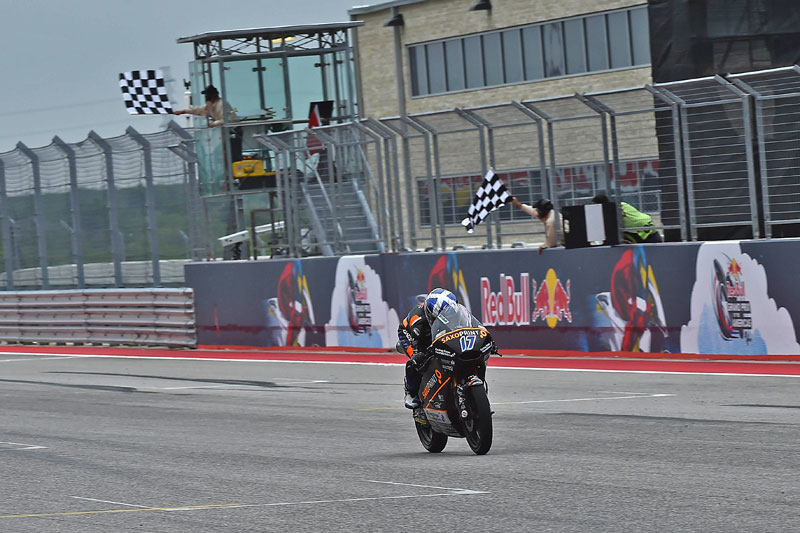 The Red Bull Grand Prix of the Americas, run at the magnificent Circuit of the Americas in Austin, Texas, started under darkening skies with a possible threat of rain looming.

SAXOPRINT RTG rider John McPhee started from 15th place on the grid, following frustrating practice sessions and a difficult Qualifying which had been compromised in part by a coming together with Livio Loi.

The first lap saw John trading places with Jorge Martin but moving into 14th by lap 2, and then swiftly moving up again into 13th. Lap three saw John moving forward again, slipping into 12th and remaining solidly part of an extended leading group.

With 13 laps to go John was dropped back to 13th and continued to trade places over the following laps, but with 10 laps remaining he had moved back up to 10th.

Two riders going down with 9 laps to go saw John move up to 8th as he continued his battle with Binder and Vazquez, and he also benefited from the exit of Miguel Oliveira and with 7 laps to go he was in 6th place.

With Danny Kent having opened up a substantial gap from all the other riders up at the front, John was in the following group, taking in places 2 to 7.

Unable to really make any inroads into the battle ahead, John became settled in 7th place and over the following laps, dropped back slightly though not losing sight of the group. And when teammate Masbou ran off on the final lap John was able to pick up one more place to cross the line in a very creditable 6th.

JohnMcPhee
“After a very difficult weekend I was a little bit nervous at the beginning of the race. The feeling of the bike was quite good, after we changed something on the bike again. I found a very good rhythm. At the end I felt very comfortable. At the end it was possible to get more or crash. So I decided to ride save and get some points.”