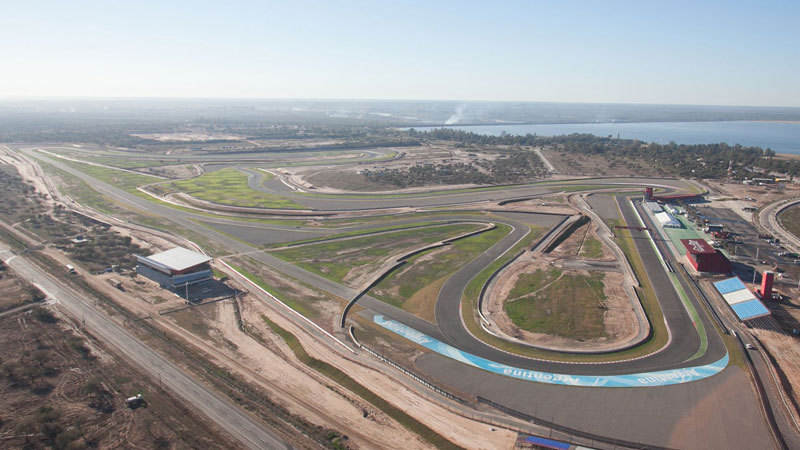 Next stop for the FIM MotoGP™ World Championship is the Gran Premio Red Bull de la República Argentina. The MotoGP™ paddock returns to the South American country for the second year in a row, and the 12th time in total.

The first Argentinean GP took place in 1961 in Buenos Aires; the first time that a Grand Prix had taken place outside of Europe. The MotoGP™ World Championship returned to the country for the first time in ten years in 2014 at the 4.8 km Termas de Rio Hondo, making Argentina the 18th country to host a MotoGP™ race since the category was introduced in 2002.

Marc Marquez will head to Argentina in buoyant mood after easing to victory at the Red Bull Grand Prix of The Americas. The win in Austin was the 20th of his fledgling career, and equalled the number achieved by two-time 500cc World Champion Freddie Spencer.

The reigning MotoGP™ World Champion has even more reasons to be confident as his Repsol Honda team completed a 1-2 last year at the circuit, with Marquez leading home his teammate Dani Pedrosa ahead of the Movistar Yamaha’s of Valentino Rossi and Jorge Lorenzo.

Rossi flies to Argentina as the current leader in the Championship standings, adding his third placed finish in Austin to the victory in Qatar. As it stands, he is 1 point ahead of Andrea Dovizioso who made it two second-placed finishes in a row for his Ducati Team in the US.

The new GP15 proved that it could be competitive at a completely different track in Austin, having fought for the race win in Qatar, although the Factory Ducati rider did not have a great time in Argentina last year, finishing down in 9th.

His teammate Andrea Iannone actually enjoyed more success last year at the same race, as he finished 6th on the Pramac Racing Ducati, and he will be looking to do even better this year having made the step up to the Factory team for 2015.

Jorge Lorenzo showed that even bronchitis couldn’t stop him in Austin, as he fought back to finish 4th despite being ill throughout the weekend. While his two fourth-placed finishes may not have been how he dreamt of starting the season, after the helmet issue in Qatar and his physical condition in Austin he will take heart from the fact he only trails his Movistar Yamaha teammate Rossi by 15 points, as the gap could have easily been much bigger.

Bradley Smith looks set to continue his battle to be the leading Satellite rider with his compatriot Cal Crutchlow with both men currently tied for 6th place in the Championship standings on 18 points. The Monster Tech 3 Yamaha rider Smith should have an advantage at the Termas de Rio Hondo after beating his teammate Pol Espargaro to 7th in Argentina last year, while Crutchlow has never ridden at the circuit before after he was forced to miss the 2014 race through injury.

Estrella Galicia 0,0 Marc VDS Racing’s Scott Redding will want to show that he has not lost any of the new found confidence he was showing on the Honda RC213V in Austin before his crash on the first lap of the race, while Team Suzuki Ecstar will look to build on their encouraging start to the season, which saw both of their riders finish inside the top ten in the US.

Yonny Hernandez will be looking to bounce back from his crash in Austin with a better finish than the 12th place he managed in Argentina in 2014, while his Pramac Racing Teammate Danilo Petrucci will want to follow up his first top ten finish for the Satellite team at the weekend with another impressive performance.

In the battle of the Open class, it’s currently Avintia Racing’s Hector Barbera who leads the way with 5 Championship points, two more than Nicky Hayden on the Aspar MotoGP Team Honda RC213V-RS. Keep an eye out for CWM LCR’s Jack Miller in Argentina as he continues to adapt to his Open class Honda after he finished last year’s Moto3™ race at the circuit in 3rd.

The Factory Aprilia Racing Team Gresini grabbed their first MotoGP™ Championship points in Austin as Alvaro Bautista finished in 15th place, although they will be hoping to have both riders complete the race this time after Marco Melandri had to retire with gearbox problems in Austin.

The action kicks off in Argentina on Friday 17 April, with the first MotoGP™ Free Practice session due to start at 09:55 local time.

2014 saw Tito Rabat lead every lap of the Gran Premio Red Bull de la República Argentina after starting from pole, one of eleven victories that season. The Moto2™ champion is currently tenth in the standings after finishing fourth in Austin following a DNF in Qatar. He and Estrella Galicia 0,0 Marc VDS teammate Alex Marquez are looking for a drama free weekend after multiple crashes in Austin.

A debut podium in the US saw Alex Rins take a surprise lead in the Championship after moving up from Moto3™. The Spaniard has taken a calm and steady approach so far, settling inside the top ten before battling the podiums come race day, adding his third place finish in the US to the fourth he achieved in Qatar. Argentina has also been kind to his teammate Luis Salom, who secured third at the Termas de Rio Hondo last year along with the fastest race lap.

Austin left a sour taste in the mouth of Xavier Simeon as contact with Johann Zarco saw the Belgian rider end his race in the gravel. Simeon will have his chance to again challenge for the podium this weekend in Argentina, a track where he has finished second in the past, meanwhile Zarco failed to score points last year.

A debut win for Sam Lowes last weekend delivered on the potential he has shown throughout testing and in Qatar. Like Rabat, Lowes will be aiming for a crash free weekend as the British rider left Texas with a plethora of bruises along with his winner’s trophy, as a result of three big crashes during Free Practice and Qualifying.

Anthony West has the most experience in Argentina, having finished eighth in the 250cc race in 1999. The Australia battled to seventh in Austin, his first top ten finish since Valencia last year and his best finish since he won at Assen in 2003.

The Moto2™ action starts on Friday with Free Practice 1 taking place at 10:55 local time in Argentina.

With Danny Kent taking the largest ever dry weather victory in the Moto3™ class, he will surely be the man to beat in Argentina.

Last year’s Grand Premio Red Bull de la República Argentina saw a fairing bashing battle go down to last few corners, with Romano Fenati taking his first win of the season. With just eight points to his name this season, the Italian will be hungry to repeat this success.

Danny Kent will again be the man to beat; the World Championship leader has been competitive in almost every session so far this season. The British rider does not have fond memories from Argentina, contact with Niklas Ajo, his then teammate, saw him crash at the finish line in 2014.

Austin saw Fabio Quartararo claim his debut Moto3™ podium, still just 15 years of age. Termas de Rio Hondo will be yet another new track for the French youngster to learn before the MotoGP™ paddock returns to Europe, and tracks he is familiar with. With just one previous visit to Argentina, the field will have less of an advantage than in Qatar and Austin.

KTM have yet to score a podium this year after being the dominant manufacturer in the championship in previous seasons. Most disappointing has been Miguel Oliveira’s two non-point scoring results due to crashes. Red Bull KTM Ajo teammate Brad Binder leads the KTM effort from seventh in the Championship.

A crash for Francesco Bagnaia ended Mahindra’s chance of a podium in Austin, but if the young Italian can avoid mistakes he will be a threat for the top three. Mahindra have increased their effort in the lightweight class this year, supplying nine bikes.

Livio Loi scored his best ever result of fifth in Argentina last year and will be looking to repeat that form now he is on a competitive Honda machine.

The Moto3™ action gets underway on Friday with Free Practice 1 taking place at 09:00 local time in Argentina.