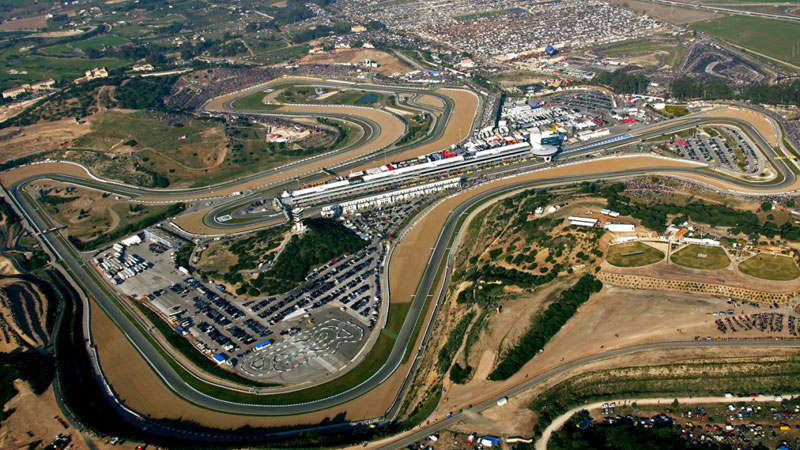 There was a dramatic twist in the MotoGP™ World Championship battle between Marc Marquez and Valentino Rossi this week, as news emerged that Marquez needed surgery after fracturing the little finger in his left hand. Marquez sustained the injury while riding dirt track in training on Saturday 25 April, and had to be operated on by Dr. Mir in Barcelona.

Movistar Yamaha’s Valentino Rossi currently holds a six-point advantage over the Ducati GP15 of Andrea Dovizioso in the World Championship standings, and a thirty-point lead over the fifth-placed Marquez. Rossi and Marquez’s clash at the previous race in Argentina has whetted fans appetites in anticipation of another great battle now the Championship has landed in Europe.

Last year at Jerez, Rossi and Marquez fought it out in the early part of the race, before Marquez went on to take the victory, with Rossi in second and Pedrosa third. This year the 36 year-old Italian will be hoping to go one better, and add to his impressive tally of 6 MotoGP™ victories at the Spanish circuit. Rossi is the most successful rider in history at Jerez, having taken 8 victories across all classes, and is one of only 3 non-Spanish riders to have stood on the top step in the MotoGP™ class, along with Casey Stoner and Loris Capirossi.

Marquez will surely have other plans though, as he became the first rider to win the race from pole position last season to claim his first victory at the Spanish circuit. Despite trailing Rossi by such a margin in the standings, the reigning MotoGP™ World Champion Marquez said that he is not panicking yet despite his injury, as he was 30 points behind his teammate Pedrosa after six races in 2013, and still went on to win the title.

Repsol Honda have not made an official decision on who will be Marquez’s teammate come the weekend, as they await news on how well Dani Pedrosa’s recovery from arm pump surgery has gone. Pedrosa will take part in a supermoto race this week to see if his rehabilitation is on course to allow him to return to action in Jerez. The man who has filled in for Pedrosa for the last two races, HRC test rider Hiroshi Aoyama, is on standby to race once more should the Spaniard not be fully recovered in time.

Rossi’s teammate Jorge Lorenzo will be looking to get his season back on track, having failed to finish on a podium in the first three races of a MotoGP™ season for the first time in his career. The Spaniard will be boosted by support from his home crowd, and the fact he took back-to-back victories at the Jerez circuit in 2010 and 2011. Lorenzo currently sits 4th in the standings, 29 points behind Rossi, and one point ahead of Marquez, but he knows that he will need to start winning races if he is to have any chance of fighting for his third title.

The Ducati Team will be hoping to continue their excellent start to the season, which has seen Andrea Dovizioso claim 3 second-places in a row on the new Desmosedici GP15. Last year the Italian finished 5th in Jerez and the team will be hoping that he can claim their first win in the class since 2010. His teammate Iannone won the Moto2™ race at Jerez in 2011, but has failed to finish a race at the circuit since moving up to the MotoGP™ class in 2013.

CMW LCR Honda’s Cal Crutchlow grabbed his first podium of the season in Argentina, and will be full of confidence heading to Spain after receiving some vital upgrades to his Factory spec bike. His previous best finish at Jerez is 4th back in 2012, after he had to retire from the race last season on board the Factory Ducati.

Team Suzuki Ecstar showed excellent signs of progress in Argentina, with Aleix Espargaro qualifying second on the grid and both GSX-RR’s finishing the race in the top ten. The Suzuki should suit the flowing and technical Jerez track, and racing in front of their home fans will boost Espargaro and his teammate Maverick Viñales. Espargaro finished last year’s MotoGP™ race in 7th on the Forward Racing Yamaha, while Viñales ended the Moto2™ race in 5th.

Last year at Jerez Monster Yamaha Tech3’s Bradley Smith beat his teammate Pol Espargaro into 8th during the race, and has tasted victory at the Spanish circuit before having won the 125cc race there in 2009. Pol Espargaro knows he has to bounce back from a poor start to 2015, and he will be looking forward to racing in front of his home fans, at a circuit he has won at before in the 125cc (2010) and Moto2™ (2012) classes.

Pramac Racing’s Yonny Hernandez will be looking to have a good weekend after being forced to retire in Argentina, and managed to cross the line in 14th at Jerez last season, while his teammate Petrucci fractured his wrist during Warm Up and was forced to miss the race.

Scott Redding on the Estrella Galicia 0,0 Marc VDS Racing Honda will be hoping to build on his first top ten finish in Argentina, having finished on the podium at Jerez in 2013 on his way to finishing as runner-up in the Moto2™ World Championship that year.

In the Open class, Avintia Racing’s Hector Barbera currently leads the standings with 8 points, although Jack Miller on the CWM LCR Honda is only two points behind him after taking the victory in Argentina, with Aspar MotoGP Team’s Nicky Hayden on 3 points.

The paddock heads to Jerez for the first European round of the 2015 season and with the top three Moto2™ riders in the championship split by just 12 points. After his first Moto2™ victory it is Zarco leading the close title fight with 53 points. Jerez will be an important round, not just for Lowes and Rins but also for Rabat to gain lost ground in the Championship.

Prior to his win in Argentina Zarco had stood on the Moto2™ podium on seven occasions. Jerez has seen the Frenchman claim one podium in the 125cc class back in 2011 where he challenged Nico Terol for the title. 2011 also saw Zarco claim his only other Grand Prix victory in Motegi.

It was not only Zarco’s first Moto2™ victory, but also the first win for his Ajo Motorsport team in the class. Both parties have worked hard to learn the new Kalex bike and find an effective base setting. Jerez offers a chance for the riders and teams to compare settings they have found throughout the first three rounds to those they used in testing.

Third place in Argentina was just the second podium in Moto2™ for Sam Lowes, who took his maiden victory in Austin. A lack of grip at the end of the Argentinian race forced the Brit to settle for third as Alex Rins broke away in the final stages. The preseason test at Jerez saw Lowes on top even in the mixed conditions that kept many riders in their pits.

Each race has seen rookie Alex Rins go one better, finishing in second at Argentina after his third in Austin. Regardless of this trend, Rins has asserted himself as a front-runner in the intermediate class and continues to improve and impress each weekend. Since joining the World Championship Rins has not had a win at Jerez, with a best finish of third last year in Moto3™.

Reigning Moto2™ Champion Tito Rabat has had a less than ideal start to the year, failing to finish on the podium at all three rounds and racing incidents in Qatar and Austin seriously hampering his races in the opening laps. 2013 saw the Spaniard take his debut pole and win at Jerez, his only Moto2™ podium at the track.

Mika Kallio, Dominique Aegerter and Jonas Folger have all had a mixed start to the season, but have had success at Jerez in the past with the trio finishing on the podium in 2014.

The Moto2™ action kicks off in Jerez with Free Practice 1 at 10:55 am local time on Friday.

All of the Moto3™ riders have experience around Jerez from pre-season testing, and many of them from previous seasons spent racing in the Spanish Championship. Many new riders such as Fabio Quartararo, Maria Herrera and Jorge Navarro will not have the difficulty of learning the track this weekend. The tighter nature of Jerez should result in a closer race for Moto3™.

Kent’s stunning 10.334 second win in Argentina is the largest ever dry weather victory in the Moto3™ class, and the greatest margin in the lightweight class since Nico Terol in 2011 at the Catalunya Grand Prix on a 125cc machine. Danny Kent has never had a podium at Jerez; his best finish in the Moto3™ class at the Spanish track was 11th in 2014. However, the Danny Kent we are seeing in 2015 appears stronger than in any other year and will be unconcerned by past results.

Leopard Racing teammate Efren Vazquez, who finished second behind Kent in Argentina, has had success around Jerez claiming a podium last year. With 49 championship points Vazquez is Kent’s closest rival and will be eager to beat his teammate for the first time this year. Vazquez’s aggressive style has allowed him to fight through the grid on previous occasions, such as in Austin where he started 16th but ended the race in third.

With two wins at Jerez, Romano Fenati is the most successful Moto3™ rider at the track. Fenati’s first win back in 2012 saw the Italian finish over 36 seconds ahead of Luis Salom in the mixed conditions. Argentina saw the Italian Qualifying in eighth, his best position of the year, before being sent to the back of the grid due to penalty points and fighting back to finish eighth.

Fabio Quartararo is very much showing the pace that brought him two back-to-back FIM CEV Repsol titles, claiming a podium in his second race and a worse finished of seventh so far. A return to the podium is certainly a strong possibility for the French rider who may even be able to challenge for the top step thanks to track knowledge.

The final corner at Jerez has been host to many famous last lap passes and with the frantic nature of Moto3™ could see even more thrilling action come Sunday.

The Moto3™ action kicks off on track on Friday at 09:00 local time.