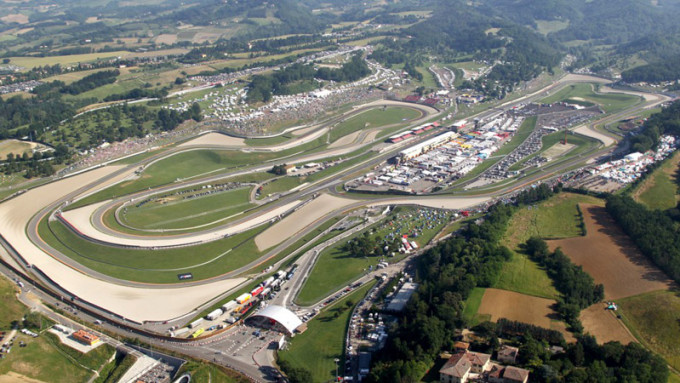 The MotoGP™ paddock heads into the Tuscan hills for round six of the World Championship at the Autodromo del Mugello. Local hero Valentino Rossi comes to the Italian track at the head of the championship standings, the first time he has done so since 2008. This was also the year in which he took his last win at the Italian track after claiming seven successive victories in MotoGP at Mugello.

Yamaha have overall been the most successful manufacturer of the MotoGP era at Mugello, with Rossi dominating from 2004 to 2008 and teammate Jorge Lorenzo winning in 2011, 2012 and 2013. The Spaniard had a difficult start to the season with visor and health issues hindering his first races but has now claimed two dominant back-to-back victories in Jerez & Le Mans, and will no doubt be a threat again at Mugello. Lorenzo has been able to break away in the last two races, but Rossi will no doubt be even more determined to win in front of his home fans which may make life difficult for Lorenzo.

It is not just Yamaha in contention at Mugello, the factory Ducati team of Andrea Iannone and Andrea Dovizioso completed a private test there prior to Le Mans and the extra data could give Ducati the boost they need to claim their first win of 2015, a main aim of the new GP15. 2009 saw Casey Stoner win the Italian GP for Ducati, the only time Ducati have claimed victory at Mugello. Le Mans saw Andrea Dovizioso return to the podium and claim third, cementing him in third overall in the standings and showing once again that Ducati are back to fighting at the front with the new Desmosedici GP15.

Despite a recently dislocated shoulder, Andrea Iannone was involved in a fierce Moto2™ style battle during the French GP, as he and Marc Marquez sparred for fourth. The exciting battle was even more impressive when you took into account Iannone’s injury, as the Italian was clearly riding through the pain barrier. The trio of Rossi, Dovizioso and Iannone all have a solid chance of winning on some soil and an all-Italian podium, as in Qatar, is not out of the question.

Le Mans was not an ideal weekend for Honda with Marc Marquez achieving their best result in fourth while Crutchlow, Redding and Pedrosa all suffered crashes. Honda had introduced a new swing arm at Le Mans designed to help in long fast corners, ideal for Mugello and hopefully the Italian track will prove Le Mans was just a small dip for the Japanese manufacturer. With just 69 points and one win, 2015 has not seen Marquez repeat his brilliant 10-win streak of 2014.

Repsol Honda teammate Dani Pedrosa returned from his arm pump surgery and despite a crash in the race he felt the weekend as a whole went well. He heads to Mugello with the aim of continuing to return to full fitness as he tests his arm over race distance and under the pressures of race conditions.

For British riders Cal Crutchlow and Scott Redding, Mugello will be an important weekend as they look to recover from their crashes during the French GP. Crutchlow received the new swing arm alongside Marquez in France whilst Redding continues to adapt to the factory Honda, having ridden the Open Class specification bike last year.

Team Suzuki Ecstar’s Aleix Espargaro underwent surgery on his thumb after his massive FP3 crash at Le Mans and is aiming to be fit for Mugello. Brother Pol Espargaro joined him in going under the knife, the younger Espargaro having the common operation to cure arm pump.

Nicky Hayden took his first victory in the Open class of 2015 as he attempts to chase down Hector Barbera in the standings. Rookies Loris Baz and Eugene Laverty took their best MotoGP™ results to date last time out and will be looking to once again score points as they adapt to their new bikes and learn new tracks such as Mugello.

The MotoGP™ on-track action at the Gran Premio d’Italia TIM kicks off with FP1 on Friday at 9.55am local time.

Five races have seen four different race winners in Moto2™ as Thomas Luthi took the top step of the podium in Le Mans. This was the tenth career victory for the Swiss rider who is now boosted to second in the Championship. However, it is Johann Zarco with 89 points who comes to Mugello full of confidence. The French rider has only finished off the podium once this season, in Qatar, due to a technical problem. With the Moto2™ grid as close as ever it looks set to be a long and tight championship battle.

In France Tito Rabat continued to improve his 2015 Kalex claiming second position. Last year’s Italian GP saw the Spaniard claim pole and take victory and this year will make his 150th Grand Prix start. Rabat is the only rider in the class to have won at Mugello in the Moto2™ category.

It was a tough weekend in France for both Jonas Folger and Alex Rins. Folger, the only rider to take multiple Moto2™ victories this season, crashed out of contention and failed to score points for the second occasion this year. This inconsistency can be costly for championship hopes and a return to points at Mugello will be critical.

A career first pole for Alex Rins once again demonstrated that despite some doubts in his Moto3™ days, the Spaniard is a serious contender. A poor start and a crash while battling with Morbidelli and teammate Salom tarnished the weekend with Rins now failing to score points twice in a row.

Morbidelli gave fans an exciting race in France as the Italian showed just how aggressive he can be when battling with Rins and Salom. The exciting rider is looking forward to his home round and is Italy’s best hope of a home podium. Of the five races held so far, Morbidelli has finished fifth in all but one, where he finished in sixth.

Another Italian joins the grid for their home round as Mattia Pasini returns to Moto2™ to wild card with the Gresini team. Pasini claimed victory in the 250cc class at Mugello in 2009 but a series of mixed results in Moto2™ have left him without a ride this year. With nothing to lose Pasini could make the race interesting for other Moto2™ regulars as he attempts to impress teams and rejoin the grid full time.

Mugello is not just the home round for Italian riders, but also the Italian-made Speed Up bike. Sam Lowes leads their charge in fourth, just three points shy of double race winning Folger. 2014 saw the Brit take his first Moto2™ front row, he’ll be hoping to repeat the feat as the last two races have left him disappointed due to tyre choice and tyre issues.

Dominique Aegerter was one of many riders to make the jump from the Suter to Kalex, but the Swiss rider has so far struggled having scored just ten points. This is in contrast to his teammate Luthi who made a similar switch, yet has claimed a victory and a podium so far this season. Aegerter finished fifth at Mugello last year, one of his eight top five finishes that year.

The Moto2™ on track action at the Gran Premio d’Italia TIM kicks off with FP1 on Friday at 10.55am local time.

Mugello and Romano Fenati have a long and joyful relationship together, the fiery Italian finished second there in 2012 after racing around the Warm Up lap and sitting on the start line with arms defiantly crossed, exciting fans around the world. In 2014 Fenati would go one better and win the Italian GP, the SKY VR46 rider clearly boosted by the home crowd whenever racing in Italy.

His win in Le Mans was KTM’s first victory of the 2015 season, after the Austrian manufacturer had to play catch up due to a lack of preseason testing. The Italian’s confidence was boosted further by a private test at Almeria after the French round. Fellow KTM riders Brad Binder and Miguel Oliveira both had difficulties in Le Mans after the tricky conditions of Qualifying and will no doubt have points to prove in Italy.

Enea Bastianini secured second after starting from 18th on the grid, a similar situation to when he scored his podium at the season open in Qatar. Mugello last year also had the Gresini rider in a similar situation, fighting for the lead having started in 16th, before he was taken out by Jack Miller and Alex Marquez while they battled in the leading group. An improved qualifying result should allow Bastianini to avoid such incidents this year.

Having finished outside of the top three for the first time in 2015 at Le Mans, Danny Kent is ready to return to the podium and continue to tighten his hold on the Moto3™ championship. The Brit currently has 104 points, his lead growing to 37 points as his initial championship rivals Quartararo and Vazquez both failed to finish in France.

Rookie Quartararo has never raced in Mugello but has so far demonstrated he is able to get up to speed quickly and has no difficulties learning new tracks. Both Jerez and Le Mans have shown that the Frenchman is still a rookie, but certainly his desire is there.

Mahindra and Francesco Bagnaia were both able to deliver on their potential and secure their first podium of 2015, as well as the first of his career. The Mahindra-Bagnaia combination is working well as the young Italian has been fighting towards the front frequently this season, something he was unable to do whilst on the KTM last year.

It is not just Italian riders out for a good result in Mugello, as both Alexis Masbou and John McPhee are desperate for a return to the top five. Masbou won in Qatar whilst McPhee scored a fifth yet the duo have been unable to repeat these results since, as they have struggled with finding a direction to head in when setting up the bike.

Mugello has been host to many exciting battles, especially in Moto3™. The 2014 race saw the top three covered by just 0.011 seconds, making it the closest grand prix podium finish of all time.

The Moto3™ on track action at the Gran Premio d’Italia TIM kicks off with FP1 on Friday at 9.00am local time.