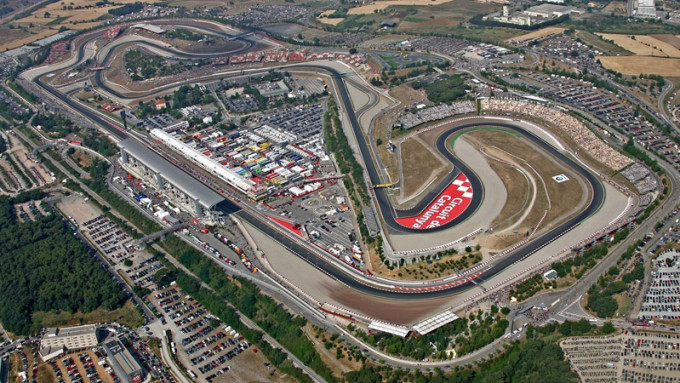 The one question on everyone’s lips as we head to the Gran Premi Monster Energy de Catalunya is, can anyone stop Jorge Lorenzo at the #CatalanGP?

The Movistar Yamaha rider has won the last three races in a row at a canter, and has looked simply untouchable, although he currently occupies second in the MotoGP™ World Championship standings, six points behind his teammate Rossi.

Lorenzo has three premier class victories to his name at the Circuit de Barcelona, which will host the seventh round of the 2015 MotoGP™ Championship, and finished last year’s race in fourth.

Rossi is the most successful rider at the Barcelona track ever since it was introduced to the World Championship calendar in 1992, with nine victories to his name across all classes (1x125cc, 2x250cc, 1x500cc & 5xMotoGP), although the last of these came back in 2009. The Italian finished second in the race last year, just 0.5s behind the winner Marc Marquez.

Rossi has not finished off the podium yet this season, but if he is to stop Lorenzo’s charge, and maintain his lead in the World Championship standings, he will need to improve his Saturday per-formances. Rossi has effectively been giving Lorenzo a head start in recent races due to his poor qualifying performances, and will need to address this is if he wants to win his 10th World Champi-onship title this year.

Repsol Honda’s Marc Marquez is facing the biggest crisis of his career so far. A nightmare week-end in Mugello saw him take no points for second time this year as he crashed out of the race. The Spaniard has identified a number of issues with his RC213V, as it appears as though his team has been treading water while his rivals have made giant strides. Marquez, the winner in Catalunya last year, will be hoping to turn his season around in front of his passionate home support and reduce the 49 point gap to Rossi in the championship standings. Marquez’ teammate Dani Pedrosa finished a comfortable fourth in Mugello, and will be confident of a good result in a race where he has not finished off the podium since 2011.

Ducati Team’s Andrea Iannone will be looking to build on his first MotoGP™ pole position, and his best ever race result (second) last time out in Mugello. The Italian has had an extra two weeks to recover from the arm injury that was affecting him in Italy, and has won at the Barcelona circuit before in Moto2™ (2012).

His teammate Andrea Dovizioso will be looking to bounce back after he was forced to retire from the Italian Grand prix with a rear sprocket issue. He has tasted success at the Circuit de Barcelona before, winning the 2006 250cc race, and finishing third on the Tech 3 Yamaha in MotoGP™ in 2012. Dovizioso has stood on the podium in four of the six races so far this season, and is currently third in the title standings, 25 points behind Rossi.

Team Suzuki Ecstar have announced they will be bringing an engine update to the Catalan Grand Prix, which will come as an added bonus to riders Aleix Espargaro and Maverick Viñales who both felt they made a major breakthrough in their chassis set-ups in Italy. Espargaro will continue his recovery from the ligament surgery he had on his right thumb after his huge Free Practice crash at Le Mans, and finished last year’s race at the circuit in sixth. His teammate Viñales will be looking to follow up his best ever MotoGP™ result last time out at Mugello (7th) with another good performance, at a circuit he has won at before in Moto3™ (2012).

The battle for the top Satellite rider took a further twist in Italy, as CWM LCR Honda’s Cal Crutchlow crashed out of the race with just three laps to go, allowing his compatriot Bradley Smith to cross the line in fifth and open up a 10 point lead in the championship standings. Crutchlow dis-located his ankle in the crash, and will have to pass a medical inspection by before he can race.

Pol Espargaro closed the gap to Crutchlow to just two points, as he followed his teammate Smith home in sixth in Italy, while Estrella Galicia 0,0’s Scott Redding knows he needs to show his true potential on his Factory Spec RC213V, after another finish outside the top ten last time out.

In the Open class, Athina Forward Racing’s Loris Baz (10pts) closed the gap to the leader, Avintia Racing’s Hector Barbera (16pts), to just six points after taking the victory in Mugello. Barbera un-derwent compartment syndrome surgery after the Italian Grand Prix to alleviate arm pump symp-toms and will not be 100% in Barcelona.

The Gran Premi Monster Energy de Catalunya officially starts with the Press Conference on Thursday at 17:00 local time, while the MotoGP™ on-track action kicks off on Friday at 9:55am local time in Barcelona.

Moto2™ has seen five different winners in the five previous races held in Barcelona, while Rabat looks to become the first repeat winner.

Catalunya has seen Tito Rabat finish on the podium in both 2013 and 2014, last year converting pole to victory. The Spaniard returned to the top step of the podium for the first time since Misano 2014 last time out in Mugello and has reignited his Moto2™ Title defence. His win at Mugello is also the first win by a reigning world champion in the intermediate-class since Marco Simoncelli won the 250cc race at Philip Island in 2009.

Johann Zarco had a strong performance in Mugello, recovering from a lacklustre grid position to challenge Rabat for the victory down to the final corner. The Barcelona track has seen mixed re-sults for Zarco who crossed the line first in 2011, but was given a 20 second penalty for an illegal passing manoeuvre. He secured a third in Moto2™ last year and has so far this seen shown steady form allowing him to securing five successive podium finishes.

2015 has been a season of highs and lows for Jonas Folger; the German has taken two wins but also failed to score points on three occasions. The 2011 season saw Folger claim third in the 125cc race at Catalunya, but he failed to finish the Moto2™ race last year. More race wins and increased consistency could still see Folger as a championship contender.

At the start of the season, Alex Rins looked set to be a title contender, but after DNFs in both France and Spain his title challenge has faded. Rins’ performances are still remarkable as a rookie in the highly competitive Moto2™ class, the Spaniard sitting in sixth on the championship table, former teammate Alex Marquez is the next highest rookie in 17th

Last year’s Catalunya GP saw Mika Kallio finish just off the podium in fourth position, within 0.2s of third spot. The Finn has had a difficult season since transferring to the Italtrans Racing Team, struggling somewhat with the 2015 version of the Kalex frame. He and the team made changes in Mugello, but an unfortunate crash stopped them from assessing the alterations over race distance.

Speed Up’s Sam Lowes continues to put up a strong fight against the overwhelming number of Kalex bikes on the Moto2™ grid. The aluminium swing arm introduced during the off-season as well as increased track knowledge has seen the British rider able to finish inside the top five on all but two occasions. Last year sway Lowes crash on the opening lap in Barcelona.

The Gran Premi Monster Energy de Catalunya Moto2™ on-track action kicks off on Friday at 10:55am local time in Barcelona.

No current Moto3™ riders have won at the Catalunya circuit, a circuit that has seen Spanish domi-nation in the lightweight class previously.

The lightweight class has in the past been Spanish dominated, especially in Catalunya where Spanish riders have won the lightweight class race for the last five years, but this season things could change. The last Spanish Moto3™ win was Efren Vazquez’s victory in Malaysia last year. This season a mix of British, French, Portuguese and Italian riders have claimed victory so far.

Hoping to continue the dominance of non-Spaniards is Danny Kent, the Brit heading to Spain with 124 championship points, a dominant lead. Both Fabio Quartararo and Efren Vazquez had been early championship rivals, but the duo has failed to score points in the last two races. Enea Basti-anini now sits second in the standings with 78 points.

2014 saw Bastianini claim his first ever Moto3™ podium, finishing second. The Italian was another rider, along with Kent, involved in the large group of riders fighting for victory in Mugello and has demonstrated strong pace throughout the year as he has been able to finish inside the top ten at each round.

Miguel Oliveira became the first Portuguese rider to win a Grand Prix last time out, and he will be hoping to continue this form in Barcelona. Both he and KTM have recovered well after a tricky start to the season that was hampered by crashes. Oliveira claimed a podium in the 2012 Moto3™ race at the Montmeló track when he finished in third.

Efren Vazquez and Isaac Viñales represent Spain’s best hope of continuing their stranglehold at the Catalunya circuit, as they sit fifth and sixth in the standings respectively. The Leopard Racing bike has proved a race winner in the hands of Danny Kent, and Vazquez himself has already had two podiums this year. A return to the rostrum would be welcome for the Basque rider after two DNFs.

Viñales secured third in Argentina on his Husqvarna machine but has since struggled to get within the top five in races. In Valencia 2014 he showed he is able to fight with the top riders as he battled Jack Miller for the podium, a strong Qualifying and race start could see Maverick’s cousin emerge as a podium challenger yet again.

The Gran Premi Monster Energy de Catalunya Moto3™ on-track action kicks off on Friday at 9:00am local time in Barcelona.