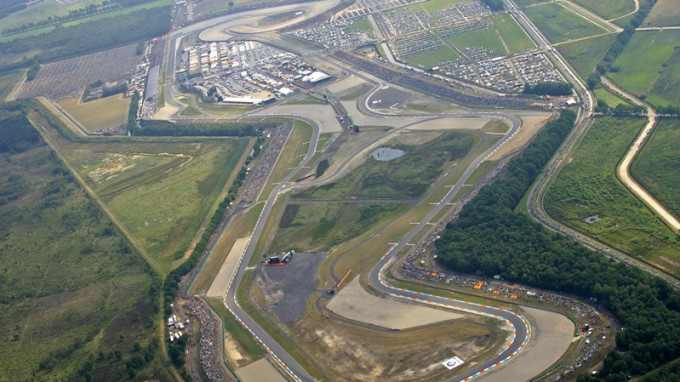 The historic TT Circuit Assen, the only venue that has hosted a Grand Prix every year since the World Championship began back in 1949, is the scene of the latest showdown between Valentino Rossi and Jorge Lorenzo to decide who sits on top of the standings.

The Movistar Yamaha duo head to the legendary circuit separated by just one point, with Rossi still holding the upper hand. The Italian, who has won six MotoGP races at Assen, is coming under severe pressure though from his teammate after Lorenzo’s incredible run of four wins in a row for the first time in his career. One thing is guaranteed, with third placed Andrea Iannone 43-points further back from Lorenzo, it will be the Spaniard or Rossi that will leave Assen as championship leader…but who will it be?

The smart money is on Lorenzo after his imperious run of form has seen him lead a record 103 consecutive laps in Jerez, Le Mans, Mugello and Barcelona. Rossi closed the gap in terms of race pace to his teammate last time out at the Circuit de Barcelona-Catalunya, but unless he can improve his Qualifying performance, it is hard to see anyone stopping Lorenzo in his current mood.

The 4.5km TT Circuit Assen plays to the Yamaha M1’s strengths, and they are the most successful manufacturer since the start of the MotoGP™ era with seven victories. In addition, both Rossi and Lorenzo will have benefitted from a recent private test at Motorland Aragon where they evaluated a new chassis for the YZR-M1.

Out of the current MotoGP™ field, Rossi is the most successful rider at the circuit, having taken eight victories across all classes (6x MotoGP™, 1x 250cc, 1x 125cc), with the last coming in 2013.

Last year’s race winner was Repsol Honda’s Marc Marquez, as he rode a brilliant flag-to-flag race to take victory ahead of Andrea Dovizioso. The reigning MotoGP™ World Champion’s title defence though has been severely dented after he crashed out of the last two races in Mugello and Barcelona. Marquez finds himself 69-points behind Rossi, as he continues to struggle with the engine characteristics of his RC213V.

In effort to gain more confidence and feel, Marquez even tried out his 2014 chassis with the current swingarm and engine at the post-Catalan GP test. Despite only managing five laps with the old chassis during the rain affected test, Marquez felt it was an improvement, though it remains to be seen if the hybrid bike will allow him to close the gap sufficiently to the Yamaha’s. One thing is for sure; Marquez clearly enjoys the Dutch track, as like Rossi, he has tasted victory in each class (1xMotoGP™, 2x Moto2, 1x 125cc) before.

Marquez’s HRC teammate Dani Pedrosa heads to Assen full of confidence off the back of his first podium of the season at the Catalan GP. It was his first podium since returning from career threatening arm pump surgery earlier this season. The Spaniard stood on the podium in last year’s rain affected Dutch GP, but has only won once before at the circuit in the 125cc race back in 2002.

For Team Suzuki Ecstar, Assen represents the next chance to test the competitiveness of the all-new GSX-RR after the engine updates they received at the Catalan GP. The fast and flowing nature of the track will suit the excellent handling characteristics of the Suzuki, and the lack of a long straight should negate a lack of top speed compared to the other Factory machines. Aleix Espargaro claimed the Japanese manufacturer’s first pole position since the 2007 Dutch GP in Barcelona, and he will now be looking to back that up with decent result in the race after recording three consecutive DNF’s. The Spaniard took pole at last year’s Dutch GP after a rain affected Qualifying, and finished what was his 150th Grand Prix appearance in fourth on the Forward Yamaha.

His teammate Maverick Viñales is looking to build on his career best finish (sixth) at the Catalan GP at a circuit he has won at twice before (2011 125cc, 2012 Moto3™) and finished second in last year’s Moto2™ race. Viñales will be boosted by the work carried out at the recent test in Barcelona, where he focussed on improving his pace on older tyres.

For Ducati Team’s Andrea Iannone, Assen represents a chance to try and close the gap in the standings to the Factory Yamahas. The Italian has not finished outside of the top 6 all season, a feat that only Rossi and Lorenzo can match, and he crossed the line in sixth at the Dutch GP last year on the Pramac Racing Ducati.

His teammate Andrea Dovizioso will be aiming to get his season back on track after two consecutive DNF’s. Dovizioso started the season with three second places in a row, but since then has only managed to step onto the podium once in the last four races. The Italian led last year’s race at the Dutch TT before being overhauled by Marquez and finishing in second. That was his third MotoGP™ podium at the circuit.

Monster Yamaha Tech 3’s Bradley Smith is the leading Satellite rider heading to Assen, as he currently occupies sixth in the World Championship standings with 68-points. The British rider has made his best ever start to a MotoGP™ season, and he has a 21-point lead over compatriot Cal Crutchlow (CWM LCR Honda).

Crutchlow will be looking to bounce back after three DNF’s in a row and begin to claim the points his impressive pace so far this season deserves. The British rider stood on the podium at the Dutch circuit in 2013 from pole position on the Tech 3 Yamaha and finished last year’s race in ninth on the Factory Ducati.

Estrella Galicia 0,0 Marc VDS rider Scott Redding equalled his best ever MotoGP™ result at the Catalan GP (seventh) after struggling so far this season to adapt to the Factory spec Honda. Redding says he is starting to get used to a bike with more power and less grip than last year’s Open class RCV1000R, and will be confident that he can continue to progress at a circuit where he has finished on the podium twice in Moto2™ (2012 & 2013).

Aspar MotoGP Team’s Eugene Laverty will be looking to build on three point scoring finishes in a row at a circuit he has won at before in World Superbikes (2103). Laverty should also benefit from receiving the new Honda Open class swingarm at recent the Barcelona test.

Avintia Racing’s Hector Barbera leads the Open class battle with 16-points, despite not scoring any points at the Catalan GP. He has a three-point advantage over Athina Forward Racing’s Loris Baz, although Jack Miller (11pts) and Stefan Bradl (9pts) have closed the gap, with the latter taking the class victory last time out in Barcelona with an impressive eighth.

The Motul TT Assen officially kicks off with the official Press Conference on Wednesday 24 June at 17:00 local time, and the on-track action starts on Thursday with Free Practice, with Qualifying on Friday and the race Saturday.

Johann Zarco is in the best form of his life to lead the Moto2 World Championship by a commanding 40-points.

Frenchman Zarco (Ajo Motorsport) has finished on the podium in all but one race this season and his run of six successive podium finishes is the best in his World Championship career.

Only a broken gearshifter when he was leading the season opener in Qatar that dropped him back to eighth cost him the chance of a 100% rostrum record in 2015. Since taking the lead of the Moto2™ World Championship in Argentina, Zarco has continued to increase his advantage in each round.

After a difficult start to 2015, Tito Rabat (Estella Galicia 0,0 Marc VDS) has found the consistency that saw him crowned Moto2™ World Champion in 2014 with four successive podiums. Rabat’s best finish at the Dutch GP is a fourth in 2012 and Assen is one of only two current circuits where the Spaniard has not had a podium finish in Moto2. Last year’s race got off to a hectic start when Rabat fell on the sighting lap and a delay due to rain allowed his Marc VDS team to make repairs and allow Rabat to begin from pole just in time.

2014 was also a difficult race for Sam Lowes (Speed Up Racing), as the Brit crashed twice during the race after initially fighting for the podium. The last three races have seen Lowes finish in fourth as he attempts to break Kalex’s domination on his Speed Up machine. Lowes is third in the championship, two points ahead of Thomas Luthi (Derendinger Racing Interwetten).

In Barcelona, Alex Rins (Paginas Amarillas HP 40) was resurgent and he finished second after two of the last three races resulted in zero points for the impressive rookie. The Spaniard has finished on the podium in Holland twice in Moto3™ with a best result of second last year.

Rain at last year’s race resulted in a magic performance from Anthony West (QMMF Racing Team), as the veteran Australian claimed only his second Grand Prix victory. That was 11 years after his first success, which also came at Assen in the 250cc class.

After an exciting last lap battle for victory at the Catalan GP, the Moto3™ riders head to the most historic track on the calendar.

Britain’s Danny Kent (Leopard Racing) claimed his fourth victory of an excellent season in Barcelona to extending his championship lead yet again. Kent leads the series by a massive 51-points and his win last time out saw him become the first British rider to win four races or more in a single season since Barry Sheene back in 1977.

Kent claimed his first ever podium in Grand Prix racing at Assen in 2012 when he was third in the Moto3™ race. On his way to the podium that year Kent made an incredible save after a moment of contact his then teammate Sandro Cortese.

Catalunya was Enea Bastianini’s first pole position in the Moto3™ class, yet the Gresini Racing Team Moto3™ rider is still hunting for his first World Championship victory after six podiums in two years. Last year’s Dutch GP ended in a vicious high side for the talented young Italian on the very first lap, but he is looking to make amends after an issue when changing gears cost him victory in Barcelona.

Miguel Oliveira made history at Assen in 2013 when he claimed a first pole position for Mahindra and he then finished third in the race. Now riding for Red Bull KTM Ajo, he sits third in the standings with 77-points, just one point ahead of Efren Vazquez (Leopard Racing), who returned to form in Barcelona with a battling third. KTM have claimed victory once at Assen in 2013 with Luis Salom.

Niccolo Antonelli (Ongetta-Rivacold) is on a run of strong form recently having claimed a fifth, sixth and fourth place finishes in the last three races. The Italian was fifth at last year’s Dutch GP, his best result of the 2014 season. Antonelli is still battling for his first Moto3™ podium after missing third by just 0.087s in Barcelona.

None of the current Moto3™ riders have claimed victory at the #DutchGP.