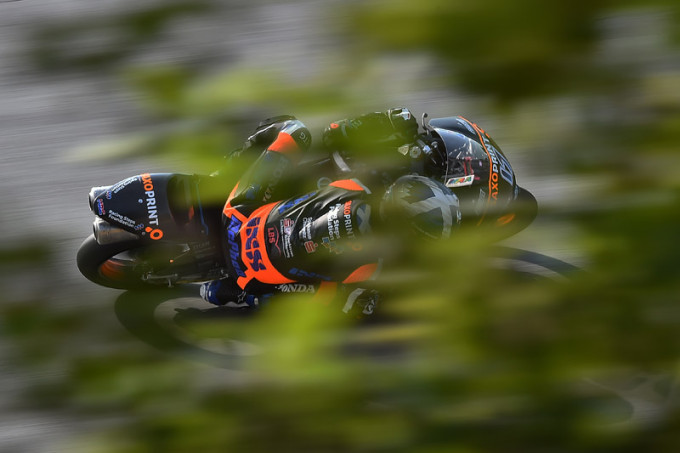 John McPhee started the German GP further back on the grid than his qualifying position thanks to a decision by Race Direction, penalising him along with ten other riders for riding too close to the racing line in the qualifying slowdown lap.

The three place penalty dropped him back to 23rd on the sunny Sunday morning grid.

Following a solid start, the SAXOPRINT RTG rider managed to move up to 18th by the end of the second lap and soon after managed to push further up to 16th.

As Kent and Vazquez pulled out a gap at the very front, they were followed by a chasing pack – with John mixing it mainly with Kornfeil and Loi in the subsequent pack – both of whom he passed by the end of lap 11 to move into 14th.

With 14 laps to go John was nudged back to 17th as the pack continued to shuffle places, and 19th with 12 laps to go.

John eventually took the flag in 17th position. It was another race where John showed good form and racecraft but which was ultimately compromised from the outset by a poor qualifying which prevented him from getting anywhere near the frontrunners.

John McPhee:
“The race was not so good for me. Directly after the start I realized that it will become a strong race. It was difficult for me to find some grip. During the race I tried changing my style a little bit, I went different lines. But at the end it was not really working much better. So I just pushed to the maximum. Now we have a break of three weeks and I will do my best to be back in Indianapolis with a strong performance.“