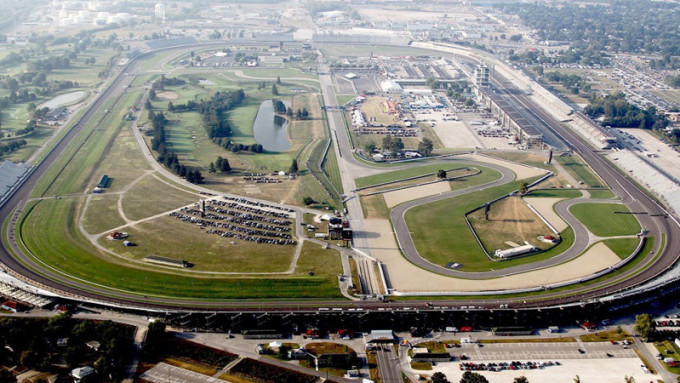 The iconic Indianapolis Motor Speedway will play host to its eighth successive MotoGP™ race this Sunday as riders and teams return from the summer break well-rested and prepared to do battle once more in what is turning into an epic MotoGP™ World Championship title scrap. The passionate American fans will be hoping for more of the same as last year’s race saw an incredible opening few laps with Marc Marquez, Valentino Rossi, Jorge Lorenzo and Andrea Dovizioso all involved in a brilliant fight, before Marquez went on to secure the win by 1.8s.

Movistar Yamaha’s Valentino Rossi leads the MotoGP™ standings by 13 points from his teammate Jorge Lorenzo, with the Italian having amassed a total of 179 points so far this year. Rossi is bidding for his tenth World Championship title this season, and will take confidence from the fact that he has never lost out on a premier class championship when he was leading the standings after nine races. Unfortunately for Rossi, Indianapolis is not such a happy hunting ground. Apart from his victory at the inaugural race in 2008, he has only managed to finish on the podium once since, his third placed finish last year. Traditionally the track has been a Honda stronghold, with them having won at the circuit for the last 5 years in a row, but with Yamaha having made big strides with the M1 this season, could we see Rossi back on the top step at Indianapolis?

His teammate Jorge Lorenzo will be looking to bounce back from his third and fourth places at Assen and the Sachsenring respectively to try and close the gap on Rossi at the top of the standings. The Spaniard was the last non-Honda winner at Indianapolis back in 2009, and has finished on the podium there in the last three races, including second last year. Lorenzo is the the most successful MotoGP™ rider in terms of podiums at Indianapolis with six to his name, and he will be hoping that he can return to the form that saw him win four races in a row earlier in the season to allow him to keep the pressure up on his teammate.

Repsol Honda’s Marc Marquez won last time out at the Sachsenring and will be heading to Indianapolis full of confidence having never lost a MotoGP™ race on US soil. His tally of 6 wins in the premier class (3x Austin, 2x Indy 1x Laguna Seca) shows how much the reigning MotoGP™ World Champion likes racing in America, and ominously for his rivals he has completely dominated the last two races at Indianapolis, winning from pole and setting the fastest lap in the process. His victory at the German GP showed that Marquez has recovered from his poor start to the season, which saw him record three DNF’s in the first 7 races, and has found a lot more confidence in his RC213V since switching to a hybrid bike using his 2014 frame with his 2015 engine, swingarm and electronics package. The team will have also benefitted from a private test conducted at Misano alongside Suzuki and Ducati, after the German GP. The reigning MotoGP™ World Champion (4th) currently lies 61-points behind Rossi and with only nine races left faces an uphill struggle to have any chance of defending his MotoGP™ title, although as we have seen with Marc Marquez, anything is possible.

Marquez’s teammate Dani Pedrosa capped his comeback from the arm pump surgery that forced him to miss three races earlier in the season with his second placed finish at the Sachsenring. That was the 96th time the Spaniard had stood on the podium in the premier class, moving him up to second on the all time list, ahead of Mick Doohan (95) and second only to Rossi (169). Like Marquez, Pedrosa has also tasted victory twice at Indianapolis (2010 & 2012) and finished last year’s race in a battling fourth place. Despite Pedrosa (67 points) being seventh in the MotoGP™ standings, he knows he can still play a crucial part in deciding where the 2015 title ends up, especially at a track that has traditionally favoured the Honda’s so much in the past.

Ducati Team’s Andrea Iannone started last year’s race from seventh, and impressed during the opening laps, before having to retire with a technical problem. Iannone currently lies third in the championship standings and will be looking to build on an incredibly consistent start to the season that has seen him finish inside the top six at every race, despite suffering from a shoulder injury sustained at Mugello. The Italian hasn’t had the best of relationships with the Indianapolis circuit though, and his best MotoGP™ finish was 11th back in his debut season in 2013. His teammate Andrea Dovizioso will be looking to get his season back on track after recording three DNF’s and a 12th in the last four races, and spent the recent private test at Misano testing out a number of different setup options in a bid to improve his fortunes. Dovizioso’s best result at Indianapolis is a third on the Tech 3 Yamaha back in 2012, and he and Iannone will be hoping they can score the first podium for Ducati at the track since Nicky Hayden in 2009.

The Team Suzuki Ecstar duo of Aleix Espargaro and Maverick Viñales will be looking to continue their excellent start to the season that has seen them consistently finishing in the top ten. Suzuki’s best results at Indianapolis are the sixth place finishes for Alvaro Bautista (2011) and Ben Spies (2008 – Wild Card). The team spent the private test at Misano focusing on chassis setup and electronics to allow them to improve the GSX-RR’s traction and power delivery. Espargaro unfortunately had to retire from last year’s race on the Forward Yamaha, while his rookie teammate Viñales clearly likes the track, having finished on the podium there 3 times in the last four years (1x125cc, 1xMoto3™, 1x Moto2™), managing to cross the line in second behind Mika Kallio in last year’s Moto2™ race.

Monster Yamaha Tech 3’s Bradley Smith (87 points) is currently sixth in the championship standings, level on points with Andrea Dovizioso, and leads the Satellite battle ahead of his compatriot Cal Crutchlow (66 points) on the CWM LCR Honda and his teammate Pol Espargaro (64 points). At Indianapolis last year it was Espargaro who came out on top, crossing the line in 5th just ahead of Smith in 6th, while Crutchlow had to settle for 8th on the Factory Ducati. One rider looking for an improvement in his results during the second half of the season, after crashing out on the first lap of the race at the Sachsenring, is Estrella Galicia 0,0 Marc VDS’s Scott Redding. The British rider on the Factory spec RC213V has showed signs that he is starting to get to grips with the Honda, and he will be keen to demonstrate this at the Indianapolis GP, with pressure mounting on his seat for next season. Redding has managed two third places at Indianapolis in Moto2™ (2010 & 2013) and he crossed the line in 9th last year after an epic battle with Crutchlow.

In the Open class, it is still Avintia Racing’s Hector Barbera who leads the way with 19 points after the first nine races. His nearest rival Loris Baz (14 points) will not be racing at the Indianapolis GP after Forward Racing had to pull out due to financial problems. This could give Jack Miller (12 points) on the CWM LCR Honda, and the Aspar MotoGP Team duo of Nicky Hayden (8 points) and Eugene Laverty (7points) a chance to close the gap to Barbera, with Hayden having finished on the podium at Indianapolis twice before (2008 & 2009). Baz’s teammate Stefan Bradl however will get to take part as he has now been announced as the permanent replacement for Michael Laverty in the Factory Aprilia Racing Team Gresini alongside Alvaro Bautista. Former MotoGP™ race winner and Moto2™ World Champion Toni Elias will act as a temporary replacement for the injured Karel Abraham (Dislocated left toe at Catalan GP) in the AB Motoracing team. Elias, fresh from competing for Moriwaki in the Suzuka 8 Hours race, is taking over from HRC test rider Hiroshi Aoyama who filled in for the Czech rider at the Sachsenring.

The action from the Red Bull Indianapolis Grand Prix kicks off on Thursday with the official Press Conference at 12:00 local time, with Free Practice starting on Friday at 9:00am.

Indianapolis has produced dramatic results in the intermediate class, in 2008 the 250cc race was called off due to hurricane Ike hitting the Speedway. Then in 2014 the Moto2™ race was red flagged after just four laps, all riders will be hoping 2015 goes off without issue.

With 179 championship points Johann Zarco (Ajo Motosport) leads the standings, this is the most points a rider has had after the first nine races in the intermediate class since Dani Pedrosa in 2005. The Frenchman currently looks unstoppable and with such a significant lead he can avoid risks and settle for second, as he did in Germany.

The German GP saw Xavier Simeon (Federal Oil Gresini Moto2) take his first ever victory in the World Championship and he now looks to become Belgium’s first ever back-to-back GP winner. This will be a tough task as Simeon has only once finished inside the top ten in Indianapolis, a best finish of ninth in 2013.

An overly ambitious Franco Morbidelli (Italtrans Racing) ended Rabat’s stunning comeback from injury last time out at the Sachsenring, the Spaniard having broken his collarbone just days before in a training accident. After almost three weeks away from racing, Rabat is now fully fit and eager to repeat his 2013 victory at the Indianapolis Motor Speedway.

The summer break has given all the riders in the Moto3™ World Championship a chance to relax ahead of their final assault on the title. Championship leader and title favourite Danny Kent (Leopard Racing) spent the majority of his holiday with former Moto3™ title contender Jack Miller in Australia. Kent leads the championship by 66 points with a total of 190, the highest amount any rider in the lightweight class has had after nine races his Valentino Rossi in 1997.

Returning from injury is Miguel Oliveira, who was forced to miss the German GP after crashing during Friday practice. During the course of the summer break KTM held a private two-day test in Barcelona and no doubt Oliveira will be eager to use their findings as he returns to hunting for the podium.

Germany saw Efren Vazquez (Leopard Racing) return to the podium after several difficult rounds, completing a Leopard Racing 1-2 on the podium. Indianapolis saw the veteran Moto3™ racer take his first ever victory last year, the only rider on the Moto3™ grid to have won at the famous track.

The second half of the year is when strong results become all the more critical as teams and managers begin to look for next year’s riders. Karel Hanika (Red Bull KTM Ajo) has started on the front row twice now, but will be targeting top five finishes to secure a top ride for 2016. Expect the mid-pack battle to become even more heated as rookies and veterans alike battle for the top bikes next year.

Due to her injury sustained in Germany, Ana Carrasco (RBA Racing Team) will sit out the Indianapolis GP and be replaced by Isaac Viñales, formerly of the Husqvarna Factory Laglisse team. In turn, Viñales has been replaced by Italian hot shot Lorenzo Dalla Porta on the Husqvarna.