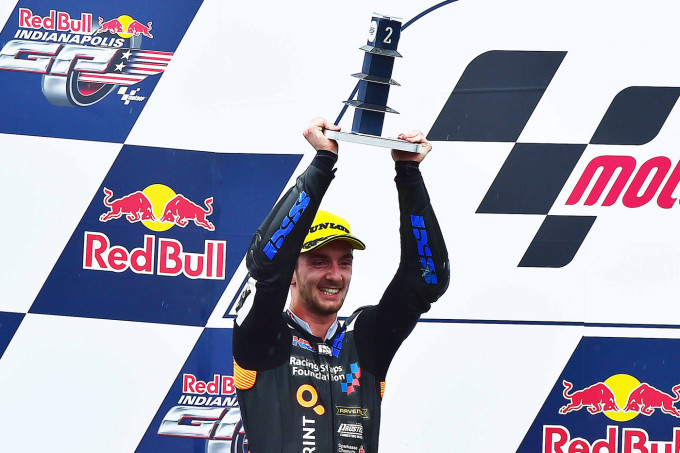 The Red Bull Indianapolis Grand Prix was marked in the Moto3 class by mixed weather conditions and something of a lottery over which tyres to use.

Following John McPhee’s improving form across the Indianapolis weekend, qualifying 18th on Saturday, raceday brought unwelcome rain shortly after warm-up and ahead of the Moto3 start, causing it to be declared a wet race.

The sudden onset of rain meant a rush to alter setups to best match the conditions and the Moto3 class got an extra five minutes to cram in more sighting laps.

John opted to run on slick tyres, a decision which could be crucial if the rain was finished for the race duration and the track was to dry out.

He started the race from pitlane – taking a ride-through penalty for a very late change, as the main body of the bikes took off cautiously from the grid.

As many riders came in over the following laps to change from wets to slicks, John soon found himself in 8th place, and with 19 laps to go he had moved up into 4th, and up to 2nd the next lap.

Livio Loi had pulled out a substantial lead ahead of John, whilst Philip Oettl was closing in behind him – with a large gap back to Fenati in 4th.

With 8 laps to go the flags went out to signal more rain, and John continued to ride a steady and slightly lonely race, and took the flag in second position – claiming a superb first Moto3 podium through a mix of great team strategy and excellent, cool headed racing.

John McPhee: P2 (+ 38.860):
“I am very happy about the result. The team made a realy good decision in the grid. We did a lot of work the whole season, so the podium was well-deserved for me and my team. It was a little luck too with the conditions, but everybody could have made the same decision. Now we have to continue that way in Brno.”