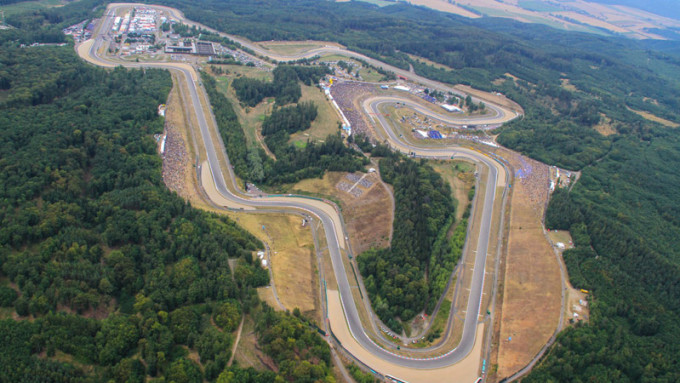 The MotoGP™ paddock arrives at the Automotodrom Brno for round 11 of the MotoGP™ World Championship, just a week after the Indianapolis Grand Prix with the battle for the title heating up nicely.

Valentino Rossi (195pts) currently leads from Jorge Lorenzo (186pts) by 9 points; with Marc Marquez (139pts) just 56 further back with eight races left. Brno has hosted a Grand Prix event since 1950, with the modern circuit having been introduced in 1987, but rarely will it have played host to such an intriguing fight for the championship.

In recent years Brno has become a Honda stronghold and the Japanese manufacturer has won the last four races held at the circuit. Last year’s race was the first that season that Marquez failed to win, as his Repsol Honda teammate Dani Pedrosa took victory ahead of Lorenzo and Rossi. Movistar Yamaha’s Valentino Rossi had his lead at the top of the standings over his teammate Jorge Lorenzo reduced from 13 to 9 at the Indianapolis GP as he crossed the line in third, just behind the Spaniard. Last year in Brno Rossi found himself in a similar situation as the Italian was forced to settle for third behind Lorenzo. Rossi is the most successful rider at the track in the MotoGP™ era with four victories, but the last of those came back in 2009. Rossi’s third place last year is the only time he has stood on the podium at the circuit since.

Lorenzo may have come off second best in Indianapolis to Marquez but he managed to finish in front of Rossi, something he also has a habit of doing at Brno. The Spaniard has four victories across all classes at the circuit (125cc – 2004, 250cc – 2006/7, and MotoGP™ – 2010) to his name. He also holds the accolade as the last non-Honda rider to win in MotoGP™ there (2010) and has only failed to finish on the podium once since then (2011). More tellingly for the title battle, since Rossi’s victory in 2009, Lorenzo has never finished behind his teammate at the Czech GP.

Repsol Honda’s Marc Marquez will arrive in Brno on the back of consecutive victories at Indianapolis and the Sachsenring. In the process Marquez has moved into third in the standings and reduced the deficit to Rossi to 56 points. Last year the reigning MotoGP™ champion was aiming for a record breaking 11th win a row at the Czech GP, but for the first time during the season he failed to take victory. In fact Marquez missed out on the podium altogether and finished in fourth. The Spaniard has tasted victory at the circuit in his rookie MotoGP™ season in 2013, and he also won the Moto2™ race in 2012.

Marquez’s teammate Pedrosa has four victories to his name at Brno, and is one of the few riders to have won in all three classes (125cc – 2003, 250cc – 2005, MotoGP™- 2012/2014) at the circuit. His race win last year coming as he stalked down the early leader Lorenzo, before making his move and going on to take victory by over half a second.

Ducati Team’s Andrea Iannone and Andrea Dovizioso enjoyed an excellent battle for fifth at the Czech GP in 2014. Iannone, who had qualified on the front row, was on the Satellite Pramac Racing bike at the time but managed to beat his compatriot on the Factory Ducati across the line to finish fifth and record his best MotoGP™ result at the track. Iannone won at Brno in Moto2™ in 2011, while his teammate Dovizioso has never won at the circuit. Dovizioso has stood on the podium in every class though (1x125cc, 2x 250cc, 1xMotoGP™) and his best MotoGP™ result was his second back in 2011.

Team Suzuki Ecstar’s Aleix Espargaro claimed eighth at the Czech GP last season on the Forward Yamaha to secure his best MotoGP™ result at the circuit. His teammate, rookie Maverick Viñales, finished sixth in the Moto2™ race last season, but stood on the podium (2nd) in the Moto3™ race in 2013.

Monster Yamaha Tech 3’s Bradley Smith (97pts) currently leads the Satellite standings by 23 points from his compatriot Cal Crutchlow (74pts) on the CWM LCR Honda with his teammate Pol Espargaro (73pts) now just one point further back. Last year Smith recorded his best MotoGP™ result at the circuit by finishing ninth, while Crutchlow was forced to retire on the Factory Ducati and Espargaro crashed out. In 2012 both Crutchlow and Espargaro secured their best results at Brno. Crutchlow finished on the MotoGP™ podium (3rd) on the Tech 3 Yamaha while Espargaro managed to claim third in the Moto2™ race.

In the Open class it is Avintia Racing’s Hector Barbera who leads the way with 20 points. Forward Racing’s Loris Baz (14pts) remains his closest rival, despite having to miss the Indianapolis GP due to financial problems with his team, although the Frenchman will be back on the grid in Brno.

Brno is the home race of AB Motoracing’s Karel Abraham. The Czech rider finished 14th in last years GP, but has been forced to miss the last four races this season after dislocating his toe during practice at the Catalan GP. Toni Elias filled in for Abraham in Indianapolis, but he his hoping to be fit enough to race in front of his home fans.

The bwin Grand Prix České republiky starts with the official Press Conference at 17:00 local time on Thursday, with the on-track action kicking off at 9am on Friday.

The Indianapolis Grand Prix saw Alex Rins (Paginas Amarillas HP 40) claim his debut victory in the Moto2™ World Championship, fending off a pack of hungry Moto2™ riders. Rins has shown potential all year, finally able to delivery at Indy. 2014 saw Rins celebrate the Moto3™ race a lap too early, ending his hopes of winning and instead finishing in a disappointing ninth. His win has promoted Rins to second overall; three points clear of Tito Rabat (Estrella Galicia 0,0 Marc VDS Racing).

Still 71 points clear of the rest, Johann Zarco (Ajo Motorsport) has a more than comfortable lead in the title hunt. The likes of Rabat and Rins will have to produce magic in the closing eight rounds to catch the Frenchman. Zarco’s best finish at the Czech GP came in 2011 in the 125cc class when he secured second whilst challenging Nico Terol for the title. Since moving to Moto2™, Zarco has a best result of fifth from 2013. At each round this year Zarco has been able to achieve his best result in the Moto2™ class, including Qatar when he encountered a broken gear shifter.

Last year saw Tito Rabat claim victory at the bwin Grand Prix České republiky by three seconds on his way to the Moto2™ crown. 2015 has not been easy for Rabat, crashes and injuries have made his title defence near impossible. Prior to his win last year Rabat has had mixed results in Brno, a third in the 2010 125cc race his only other top five finish. Last year’s victory at Brno kick-started a three race win streak for Rabat, if he can repeat that in 2015 the title may still be alive.

The last four years have seen Thomas Luthi (Derendinger Racing Interwetten) finish inside the top five, including two podiums. Luthi has had a steady 2015 season, able to finish within the top six at almost every race but he has lacked the final tenths needed to be in the podium fight. With 109 points the Swiss rider is still in the battle for a top three championship finish.

A rapidly drying track saw big gambles pay off in the Moto3™ World Championship as the likes of Livio Loi (RW Racing GP), John McPhee (SAXOPRINT RTG) and Philipp Oettl (Schedl GP Racing) risked an early change to slicks, and secured their debut podiums. The usual front-runners left their changes at Indy late, seeing many suffer as a result. All eyes are now focused on a drama free bwin Grand Prix České republiky.

For the first time in 2015 Danny Kent (Leopard Racing) failed to score, his tyre change taking a massive two and a half minutes, roughly a minute longer than average. Despite this the Brit still holds a 56-point lead in the Moto3™ standings. Brno saw Kent claim his first podium of 2014 with third, his best result at the track. No doubt Kent will be back battling for victory in Brno if circumstances remain normal.

Perhaps the biggest benefactor of the unique situation in Indy was Romano Fenati (SKY Racing Team VR46), able to finish fourth and gain back significant championship points. The fiery Italian moves to third in the World Championship standings and is now the leading KTM rider. In his three previous visits to the Automotodrom Brno, Fenati has just once finished inside the top ten, a best of eighth in 2012.

2014 was a stellar year for Alexis Masbou (SAXOPRINT RTG) at the Czech GP, the Frenchman claiming the first victory of his career. Masbou started 2015 with a spectacular win in Qatar but has since struggled to even score points, a return to the top ten would be more than welcome for Masbou.

Second in the championship, Enea Bastianini (Gresini Racing Team Moto3) is another rider with past success in Brno. 2014, his debut year in the Moto3™ class, saw him fight to second in a classic Moto3™ drag to the line. Opportunities to gain points on Kent are rapidly diminishing, the Italian needs to start beating the Brit as soon as possible.

After two front row starts in Germany and Assen, Karel Hanika (Red Bull KTM Ajo) heads to his home race in strong form. Last year the Czech rider was able to finish 15th in Brno having started from 17th on the grid. Back in 2013, Hanika claimed pole position and the win at Brno in the Red Bull Rookies Cup.