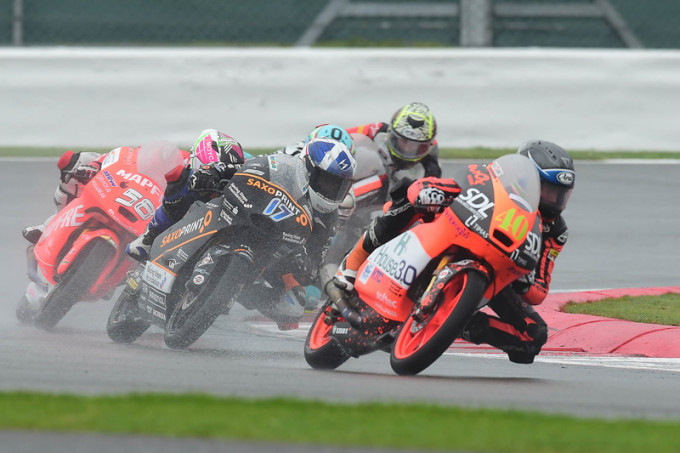 Today’s Moto3 British Grand Prix was run in murky and wet conditions. Not only that but after some progress through free practices and a decent Qualifying based on that, John McPhee found himself with difficulties in the Sunday morning warm-up – so significant changes were made to the bike, leaving John sounding uncertain as he spoke to commentators on the grid.

From his twelfth place grid slot, John made a slightly cautious start to the 17 lap race and over the first few corners found himself shifted backwards to seventeenth position.

As the field opened up and riders got to grips with the treacherous conditions, with falls from the likes of Hanika, Navarro and Brad Binder, John moved up to thirteenth by lap 4, then twelfth as leader Isaac Viñales went down.

Six laps in and John was in tenth place, with the track properly wet with patches of standing water and conditions looking properly set in, with Darryn Binder ahead of him and Livio Loi behind, and with Danny Kent leading the field.

With Dalla Porta some six seconds behind him, John traded places with Juanfran Guevara as the laps counted down. And with one lap to go, the departure of both Bagnaia and Bastianini moved the young Scot up into sixth place.

Danny Kent tok the chequered flag as winner of an extraordinary race of attrition, followed by Kornfeil and Antonelli, with John finishing in sixth ahead of teammate Alexis Masbou who was eleventh.

John McPhee: P6 (+53.726):
“We made a good step forward between the Warm Up and the race and I was feeling more confident with the bike. It took me some laps to understand where I have the grip and where it is more difficult. But lap by lap I became a little bit faster and felt more confident with the bike. I was able to fight good with the other guys. My aim was just to try and get the best position as possible. I always pushed to the front and tried not to crash. Then I realized that the front guys were completely gone. So in the last laps I had to be a little more sensible and keep the pace good. I am very happy with today. It was a very good result and we are again in the Top 10. We came closer to the front. I hope we can continue this way.”