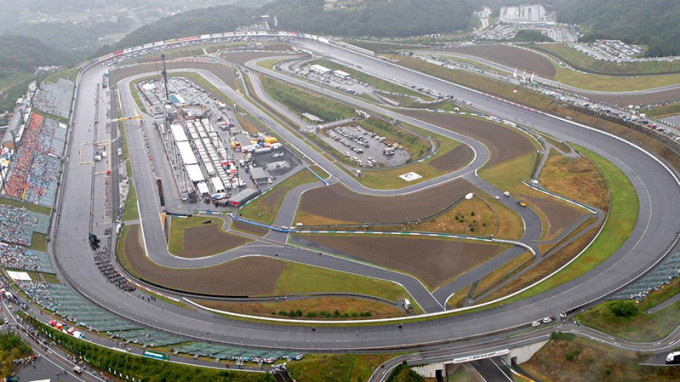 The countdown to the Championship is annually ignited with the MotoGP family packing its cargo and heading to the triple-header with 3 back to back races, a nonstop tour through Japan, Australia and Malaysia with no time to rest nor to recover from injuries. Jorge Lorenzo heads to the Motul Grand Prix of Japan trailing Valentino Rossi by just 14 points in the 2015 MotoGP™ World Championship.

The #AragonGP saw Jorge Lorenzo make it six wins for the season and reduce Rossi’s lead by nine points as he returned to the top step of the podium for the first time since Brno. Dani Pedrosa won an excellent battle with Valentino Rossi for the final two spots on the podium, while Marc Marquez dramatically crashed out on just the second lap.

The 2015 MotoGP World Championship now moves onto round 15, the Motul Grand Prix of Japan at the Twin Ring Motegi. Motegi was introduced onto the World Championship calendar in 1999 and this will be the 17th year in a row it has hosted a GP event. In the past it has played host to many a title deciding battle – including seeing Marc Marquez lift the title last year after finishing in second – but few as dramatic as the 2015 MotoGP™ World Championship.

Movistar Yamaha’s Rossi, having seen his lead in the standings cut to just 14 points after his third place at Aragon, knows he needs to bounce back at Motegi. The Italian has stood on the podium ten times in total at the circuit and has two premier class victories to his name but the last came back in 2008. Last year the ‘Doctor’ crossed the line in third.

Lorenzo is riding the crest of a wave after his dominant performance at Aragon and will be the man to beat having won back-to-back races at Motegi over the last two seasons. However, he was flying to Japan with his arm in a sling as he sustained a minor ligament injury on his left shoulder during a training session. The Spaniard has been on the podium five times in the MotoGP™ class at the circuit including winning the MotoGP™ race in 2009 and will be looking to reduce the gap to Rossi even more.

Repsol Honda’s Marquez trails Rossi by 79 points after his fifth DNF of the season at Aragon but comes into the Japanese GP having broken his left hand in a cycling accident. Marquez immediately underwent surgery and his fitness will be assessed over the course of the weekend. The Spaniard lifted the MotoGP™ title at Motegi last year after crossing the line in second, repeating his race result from his rookie season. The reigning MotoGP™ World Champion has finished in either first or second at Motegi over the last five years across all classes, but has never won a MotoGP™ race at the circuit.

Marquez’s teammate Dani Pedrosa has recorded four victories across all classes at Motegi, making him the most successful rider in terms of wins in the track’s history (2x MotoGP™, 1x250cc, 1x125cc). Pedrosa’s two MotoGP™ wins came in successive years in 2011 & 2012. In last year’s race the Spaniard crossed the line in 4th.

Ducati have won four MotoGP™ races at Motegi, the last of which came with Casey Stoner in 2010. Last year Ducati Team’s Andrea Dovizioso qualified on pole and crossed the line in fifth to record the team’s best finish at the track since Stoner’s victory. His teammate Andrea Iannone finished last year’s race in sixth on the Pramac Ducati, but has won twice at the circuit before in the smaller classes (125cc – 2009, Moto2™ – 2011).

Suzuki won the first two GP’s at Motegi in 1999 and 2000, but since the inception of the MotoGP™ era their best result was John Hopkins’ fifth place in 2002. Team Suzuki Ecstar’s Aleix Espargaro’s best result at the track is a seventh in the 2008 250cc race. Last year he crossed the line in 11th as the leading Open class rider on the Forward Racing Yamaha.

In the Open standings it is Forward Racing’s Loris Baz who leads the way with 28 points ahead of Hector Barbera (23pts) on the Avintia Racing Ducati and LCR Honda’s Jack Miller in third (16pts).

AB Motoracing’s Karel Abraham will miss the Japanese GP due to the injured toe that forced him to withdraw from the race in Aragon and he will be replaced by Kousuke Akiyoshi. There are two japanese wildcards for this round, Team HRC’s Takumi Takahashi and Katsuyuki Nakasuga on the Yamalube Racing Team Yamaha.

The Motul Grand Prix of Japan officially kicks off on Thursday at 17:00 local time with the Press Conference. The on-track action starts on Friday at 9am local time with Free Practice for all three classes. Check out the full schedule and the MotoGP™ World Championship standings.

For the second time in 2015, Johann Zarco (Ajo Motorsport) is presented with a chance to claim the 2015 Moto2™ World Championship as his own. A disappointing weekend in Aragon saw Estrella Galicia 0,0 Marc VDS’ Tito Rabat take a hard fought win and claw back vital championship points. For the Frenchman to claim the title he must leave Motegi with at least a 75-point advantage, the current gap standing at 78-points.

Zarco took his first ever GP win at the Japanese track back in 2011 and since moving up to the Moto2™ class has a best result of fourth, achieved in 2014. Standing between Zarco and the title is Tito Rabat, riding a wave of confidence after a fantastic home win in Aragon and announcing a move up to the MotoGP™ World Championship in 2016 with the Estrella Galicia 0,0 Marc VDS squad. Twice the Spanish rider has stood on the Japanese podium, a third in both 2012 and 2014. The gap might be vast, but the fight for the title isn’t over yet and Rabat will continue to push to end his Moto2™ career with the best results possible.

It was not an easy win for Rabat in Aragon, impressive rookie Alex Rins (Paginas Amarillas HP 40) pushing him down to the wire as he recovered from a disastrous San Marino GP. Now 100 points down on Zarco, Rins’ chances of taking the title in his rookie season are gone, but the fight for second with Rabat is still on as just 22 points split the Spanish pair. Rins was one of just a few riders to test a version of the 2016 Kalex in Aragon, the upgrade appearing as a positive step forward.

Takaaki Nakagami is out hunting for his second podium of 2015, having claimed third in Misano. The Idemitsu Honda Team Asia rider has a best finish of seventh at Motegi in 2012 and as the lone Japanese rider in the intermediate class is out for a strong result.

The Moto2™ race in Aragon was red flagged due to a first lap crash involving both Dominique Aegerter (Technomag Racing Interwetten) and Xavier Simeon (Federal Oil Gresini Moto2). Simeon was able to remount and join the restarted race, but unfortunately Aegerter was taken to hospital for an extensive list of injures. While none of the Swiss rider’s injures are serious or life threatening, he will be forced to miss the race in Japan which ends his run as the only rider to compete in every Moto2™ race since the class was introduced in 2010. The recovering Swiss is to be replaced by the Australian rider Josh Hook. Franco Morbidelli (Italtrans Racing Team) will also have to watch the action from home for yet another round, as he is sitting out of the Motegi race due to injury.

With just a handful of corners left in Aragon, Enea Bastianini (Gresini Racing Team Moto3) highsided out of the race and handed Danny Kent (Leopard Racing) a potentially enormous lead in the Moto3™ World Championship. But just a few hundred meters from the line, disaster struck for the Brit as he himself was launched skywards, resulting in his first DNF of the season. As such the points gap between the Honda pair remains at 55-points as they head to the Motul Grand Prix of Japan, but with Miguel Oliveira (Red Bull KTM Ajo) having taken his third win of the season, Bastianini’s second is no longer safe.

If Kent can leave Motegi with a 75-point lead over Bastianini, he will be crowned the 2015 Moto3™ World Champion. This can be achieved by Kent winning and Bastianini finishing 11th or lower or Kent finishing second and Bastianini failing to score. It was in Motegi during the 2012 Moto3™ season that Kent claimed his first every grand prix victory. Since then he has not finished on the podium at the Japanese circuit, ending the 2014 race in sixth after a dramatic final lap.

Bastianini will no doubt be doing his best to again close the gap to Kent, with just four races of the 2015 season left the Italian needs to return to winning ways. It’s not just Kent’s title chances the Gresini rider has to concern himself with, as after Aragon he is just 20 points ahead of Portugal’s Miguel Oliveira. If Bastianini can claim pole in Motegi he will become the first Italian rider to take three successive poles in the lightweight class since Mattia Pasini in 2007.

Third in the championship and as the leading KTM in the standings, Miguel Oliveira is doing all he can to remain in the top three of the world standings. His best result in Japan is a fourth secured in 2013. During the 2014 race he was battling with leaders, but highsided with just nine laps remaining.

The battle for top KTM is tight; Romano Fenati (SKY Racing Team VR46) sits just four points behind Oliveira. The Italian is yet to claim a podium at Motegi, having achieved a best result of fifth in 2013.

It will be a special round for both Hiroki Ono (Leopard Racing) and Tatsuki Suzuki (CIP) who will race in front of their home crowd for the first time as full time World Championship riders. The 2015 season has been a difficult rookie campaign for Ono with six crashes and a best finish of tenth last time out in Aragon. Suzuki has impressed many on the Mahindra, especially during the British GP when he scored his first points of 2015 with a strong tenth. The Aragon GP saw him end the race in 16th, just outside the points. Both riders will be eager to impress their home fans and produce strong races as they seek to secure their futures in the World Championship.