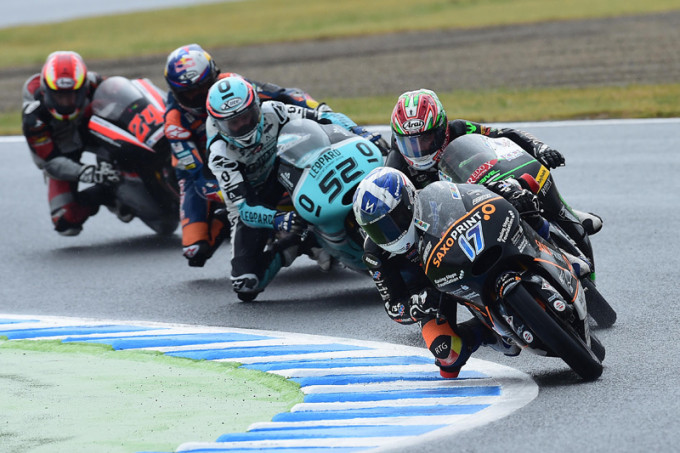 Race day brought fog and rain to Motegi, and sessions began with a shortened warm-up. The Moto3 race was also reset to be run over a shortened distance of 13, instead of the originally planned 20 laps.

John McPhee took to the conditions admirably and fought back brilliantly from his starting position of 24th to work his way up into the top ten – finishing ninth.

Once again, tricky conditions levelled the field and allowed John to shine where otherwise the bike might have held him back. The points from today’s race move him up to 11th position in the overall championship standings.

John McPhee – P9 (+18,153):
“Starting from 24th position, I was happy to come up into the Top 10 today in the race. After a strong warm-up I was feeling confident. I thought That Top 5 Would Be Possible, but in the race I had some problems with the grip. And as I started to push harder I started to loose the front a lot in the corner entry and in the maximum-angle I was loosing the rear so I had to be a little bit more careful not to crash. But I still gave 100% every lap and in the end we made some good points in the championship. So not a bad result after a difficult weekend.”