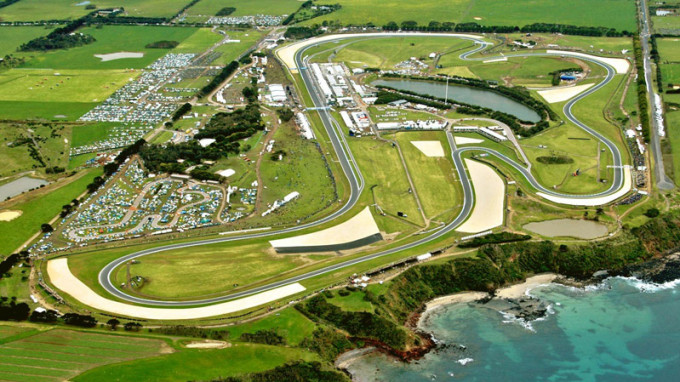 The 2015 MotoGP™ World Championship saw another dramatic twist at the Japanese GP as Repsol Honda’s Dani Pedrosa, who clearly had not read the script, won his 50th GP with Rossi and Lorenzo completing the podium. This meant that Rossi extended his advantage by four points to 18 over his teammate Lorenzo in what is turning into one of the most tense championship battles of all time. The title fight has now also officially become a two horse race as the third placed Marc Marquez is now out of contention due to the fact he is 85 points behind Rossi, with just 75 points available.

Up next is the Australian GP at the legendary Phillip Island circuit, where once again Rossi and Lorenzo will face-off against each other in a bid to strike a decisive blow in the championship battle. The Australian GP was introduced to the World Championship calendar in 1989, and apart from six GP’s during 1991-1996 at Eastern Creek, it’s home has been the historic Victorian track that has hosted racing since 1928.

Last year’s Australian GP saw Rossi take the race win by over ten seconds from Lorenzo, after Repsol Honda’s Marquez had crashed out of a commanding lead. If history were to repeat itself in 2015, Rossi’s advantage would be up to 23 points heading to Sepang.

Rossi is the most successful rider in the modern era at Phillip Island, having taken 8 victories across all classes (2x 250cc, 1x500cc, 5xMotoGP™). This includes a run of 5 premier class victories in a row between 2001-2005, and the ‘Doctor’ was also ever present on the podium at the circuit across all classes between 1998-2010. Last year saw Rossi taste victory in Australia for the first time since 2005. The nine-time World Champion will be hoping to repeat this feat in 2015, although he knows that if he finishes second to Lorenzo in the last three races it will still be enough to see him lift that elusive tenth title.

Lorenzo has only won once at the circuit in the premier class, back in 2013; although he did also take the 250cc race win in 2007. More tellingly he has not finished lower than second in the last three years at Phillip Island, but he knows he needs to win the remaining three races of the season to pile as much pressure as possible on Rossi if he is to be successful in his bid for a third MotoGP™ crown.

Pedrosa, whose return to form could see him play a major part in deciding where the title ends up in 2015, has never won in the premier class at Phillip Island before, with his best result being second in 2013. He did take the 250cc race win in 2005 and one thing is for sure, if he can maintain the pace he has shown at the Aragon and Motegi, he will be threat to the podium once more. Last year he was forced to retire after contact with Andrea Iannone damaged his bike.

His teammate Marquez finished in fourth at Motegi despite riding with a broken left hand. An extra weeks recovery should aid the Spaniard although Phillip Island is one of the only two tracks on the calendar, along with Motegi, that he has not won at in the premier class. In fact he has never even registered a result at the track in MotoGP™, after crashing out of last year’s race and being disqualified in 2013. He did however win the 125cc race in 2010 and, after starting from pole, was leading last year’s race by 4s when he fell.

Ducati Team’s Andrea Dovizioso now finds himself seventh in the championship standings after finishing fifth at Motegi, but only 4 points behind the resurgent Pedrosa in fifth. Last year he crossed the line in fourth for his best MotoGP™ result at the track, although he has won in Australia before in the 2004 125cc race. His teammate Andrea Iannone crashed out of last year’s race and has a best placed MotoGP™ finish of 8th in 2013, but stood on the podium in the 2010 Moto2™ race.

Team Suzuki Ecstar’s Aleix Espargaro has only managed two MotoGP™ top ten finishes in Australia, with his best result his eighth back in 2012 on the Pramac Ducati. In last year’s race Stefan Bradl took out the Spaniard while they were battling for fifth. His teammate Maverick Viñales won the Moto2™ race at the circuit last year and was on the podium in Moto3™ in 2013, as the Spaniard looks to bounce back after crashing out of the race in Motegi.

Bradley Smith (152pts) on the Monster Yamaha Tech 3 M1 still leads the Satellite battle by 54 points despite losing out to LCR Honda’s Cal Crutchlow (98pts) in the battle for sixth on the last lap at Motegi. The fight for second is heating up though, as with Octo Pramac Racing’s Danilo Petrucci’s (93pts) crashing out at the Japanese GP, the Italian now finds himself trailing Crutchlow by five points with Smith’s teammate Pol Espargaro also (88pts) hot on his heels. In last year’s race Crutchlow crashed out from second on the last lap to gift Smith the final podium spot, while Espargaro also crashed out and Petrucci crossed the line in 12th on the IodaRacing ART. EG 0,0 Marc VDS’s Scott Redding recorded his best result of the season at theAustralian GP last year, crossing the line in 7th on the Gresini Honda.

Avintia Racing’s Hector Barbera (30pts) took the Open class victory at the Japanese GP as he finished in an impressive ninth place. Barbera’s career best MotoGP™ result came at the Australian GP last year when he crossed the line in fifth. His main rival in the class, Forward Racing’s Loris Baz (28pts), was forced to retire from the race at Motegi with front-end issues and now trails the Spaniard by two points. The battle to be the leading Open Honda rider currently sees both Jack Miller (LCR Honda) and Nicky Hayden (Aspar MotoGP Team) tied on 16 points.

The Pramac Australian Grand Prix officially kicks off with Thursday’s Press Conference at 17:00 local time, with the on-track action starting at 10am on Friday with Free Practice for all three classes.

Johann Zarco (Ajo Motorsport) was crowned the 2015 Moto2™ World Champion after FP1 at the Japanese GP. His lone title rival, Tito Rabat (Estrella Galicia 0,0 Marc VDS) was unable to compete in the race due to a broken left radius. Zarco celebrated his title with victory in Japan, overcoming difficult conditions to cross the line 4.5 seconds ahead of second. The intense back-to-back schedule of the flyaways has given the Frenchman little time to relax and soak in the feeling of being a World Champion, his focus already on the Australian GP.

During his first year in the Moto2™ World Championship, Zarco claimed fifth at Phillip Island, his best finish at the track in the intermediate class. The following two years saw him unable to finish.

Rabat’s participation in the race is still under question, as in Japan he will have to undergo a medical check and then assess his on track performance to see how his injury fares. The decision to withdraw from the Japanese GP was made due to a lack of strength and power in his left arm. Alex Rins (Paginas Amarillas HP 40) sits 17 points behind Rabat in the fight for second; a disappointing ride to 11th saw the rookie unable to capitalize on Rabat missing the race.

Podium finishes from Jonas Folger (AGR Team) and Sandro Cortese (Dynavolt Intact GP) helped to elevate their championship positions, Folger sits fifth with Cortese moving to ninth. The German pair will be teammates in 2016 and both are aiming for continued improvements towards the end of the season having both had mixed years. Cortese has twice won at Phillip Island, in 2011 while riding in the 125cc class and again in 2012 on his way to the Moto3™ World Championship.

With many riders yet to secure seats for 2016, the Pramac Australian Motorcycle Grand Prix will be critical for on going negotiations. The sweeping bends and high-speed curves of the track make it a favourite of riders and fans alike.

As Dominique Aegerter is still recovering from injury, his seat in the Technomag Racing Interwetten team will again be filled by Australian Josh Hook. Hook has had ample experience around Phillip Island having raced in the Australian Superbike series and has twice raced there as a wildcard in the lightweight class. The Australian crashed out of the Japanese GP, but was making solid progress as he learned the Kalex.

Yet again the Moto3™ World Championship was presented with another unique challenge in Japan, their race reduced to a 13 lap sprint and run in the pouring rain. Italy’s Niccolo Antonelli (Ongetta-Rivacold) returned to victory with a dominant ride at Motegi, opening an early gap and managing it perfectly as the field battled behind him. Championship leader Danny Kent (Leopard Racing) ended down in sixth but critically was ahead of closest title rival Enea Bastianini (Gresini Racing Team Moto3).

With just two rounds after the Pramac Australian Motorcycle Grand Prix, Kent needs to leave Australia with a 50 point advantage over the rider in second to secure the 2015 Moto3™ World Championship. The gap to Bastianini currently stands at 56 points; simply finishing ahead of the Italian will secure Kent the title but Miguel Oliveira (Red Bull KTM Ajo) may also play a role. Danny Kent has only once scored points at Phillip Island in the lightweight class, when he was fifth in 2012.

KTM’s Miguel Oliveira produced a spirited ride to second in Japan, desperate to keep his title hopes alive. He was able to close the gap to Kent, but currently sits 65-points behind and will need to gain 16-points on the Brit if he wants to keep the battle going. Oliveira has a best finish of second at the Australian GP in 2012 and is aiming to continue his run of three podium finished.

The Australian GP will be a critical round for Bastianini, not only is he attempting to stop Kent taking the crown but he also has to defend second in the championship from Oliveira who is just 9 points behind. The Italian failed to finish the race last year after qualifying down in 20th. Overall 2015 has been an incredible year for the Italian, emerging as a title challenger in just his second full season.

For the second time in his World Championship career Remy Gardner will get to race in front of his home fans at the legendary Phillip Island circuit. In 2014 Gardner raced to a respectable 26th place and will be looking to fight for points in 2015. The year has been difficult for Gardner on the Mahindra, his best finish 17th place, which he has achieved on three occasions.

Hiroki Ono (Leopard Racing), who sustained an injury in his home race in Motegi, will be replaced by 18 year old Joan Mir, a participant in the FIM CEV Repsol Junior World Championship in Moto3.