John ends the season with top ten finish at Valencia 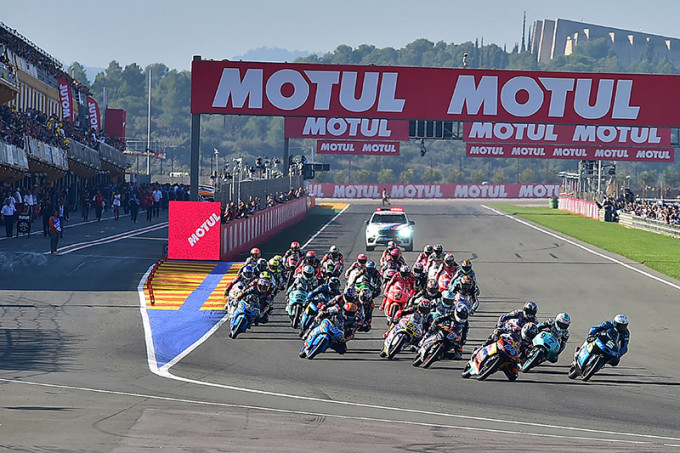 The Moto3 Grand Prix at Valencia took place in bright sunshine – a dense fog bank having enveloped the circuit earlier in the morning, delaying the warm-up session. It soon burned off and sun and rising temperatures swiftly took its place.

John had a slightly slow start off the grid, dropping to fourth by the first corner, but recovered over the next couple of laps to third, only to be shifted back again to fourth by Efren Vazquez, whilst Portuguese rider Miguel Oliveira led the race.

By lap 7 John had been shuffled back to 8th, remaining in the leading pack. He continued to hold this position for the rest of the race, until he was pushed back to 10th with 2 laps remaining.

A last lap tangle between Vazquez, Antonelli and Fenati allowed John to recover to seventh position across the line. Miguel Oliveria won the race, whilst the points position allowed Danny Kent to finally take the Chapionship title.

John McPhee: P7 (+4.087):
“It is some good points to finish the season. We now come inside the Top 11 in the championship also. This is good. In the race I was hoping for more. I felt like I had the pace to fight in the front, but in the first three or four laps the tires were not full temperature and I had to try to bring the temperature back in to it. Then I managed to do my fastest lap, but took some time to find the rhythm again. Then at the end of the race I started to loose the rear grip and I had some big moments, so I had to be a bit careful and just tried to bring home as many points as possible.”