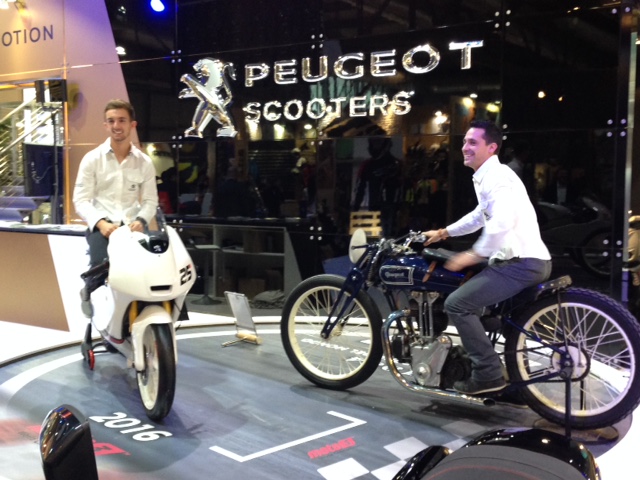 John McPhee was in Milan today for the Peugeot Motocycle launch at the EICMA international bike show, where he appeared on stage with teammate Alexis Masbou to present the new bike to the crowds.

The Peugeot motorcycle brand will return to top-level motorcycle racing in 2016 via a Moto3 project in collaboration with Mahindra Racing.

Last year Mahindra took a 51 per cent stake in Peugeot Motorcycles, a collaboration that has already brought an Italian national Moto3 title for Marco Bezzecchi on a Peugeot branded Moto3.

Now the historic French marque, that produced its first motorcycle back in 1898 and recorded victories in famous races such as the Bol d’Or during the 1950s, will be back at the top-level of international motorcycle racing.

“We are delighted to add a Peugeot Motocycles entry to our Moto3 line-up for 2016 and are looking forward to next season being the biggest and most successful so far for Mahindra Racing,” affirmed Ruzbeh Irani, Mahindra Racing Chairman and Mahindra’s President (Group Communications & Ethics) and Chief Brand Officer.

The Peugeot MGP3O will share its mechanical DNA with the Mahindra Racing bikes on the grid, but Peugeot Motocycles will contest the series as a Constructor in its own right. The addition of the two Peugeot racers further underlines the growing presence of Mahindra in international motorcycle racing. The only Indian constructor in MotoGP will continue to run programmes in the CEV Moto3 Junior World Championship and the Italian CIV series.

“I am confident that the extensive work that we are undertaking on the MGP3O at our new technical centre in Italy will result in greater on-track success for both Mahindra Racing and Peugeot Motocycles.”

Peugeot’s main motorcycle racing involvement was in the first half of the 20th century and in endurance events.