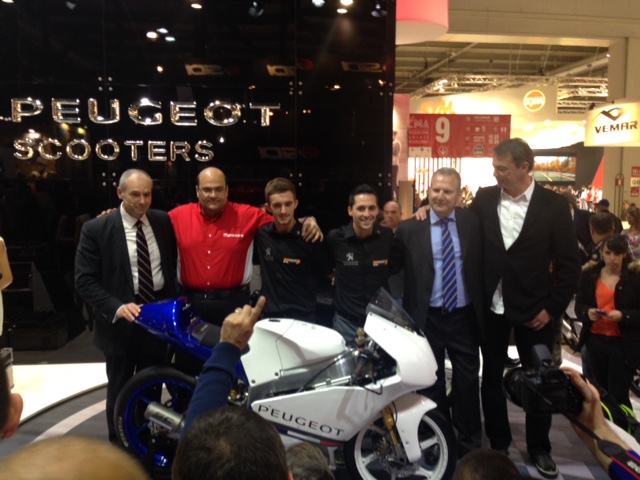 So I’ve just returned home after a visit to the EIMCA: Basically one of the largest motorcycle shows in the world, near the centre of Milan. What an amazing place! I think I could have spent a whole week there and still not managed to see everything.

We were there to launch the new 2016 Peugeot Moto3 that I will be riding! We also did some video interviews and a photo shoot which should be up online soon.

It was great to spend some time with Peugeot motorcycles and the Mahindra Racing guys. Loads of press turned out to hear Frédéric Fabre Managing Director of Peugeot speak about the project.

The passion and desire they have to win is very similar to myself and gives me great confidence looking ahead to the 2016 season!

Alexis and I then had the privilege of taking off the cover from the new Peugeot race bike.

The new Peugeot Moto3 bike looks great and is actually very similar colours to my old 125 from back in 2010 when I won four Scottish/English championships in the one year.

Mahindra Racing are now working on developing the new 2016 package and we’ll get to test it in February for the first time and put it through its paces. I’m excited to see just how strong we can be!!