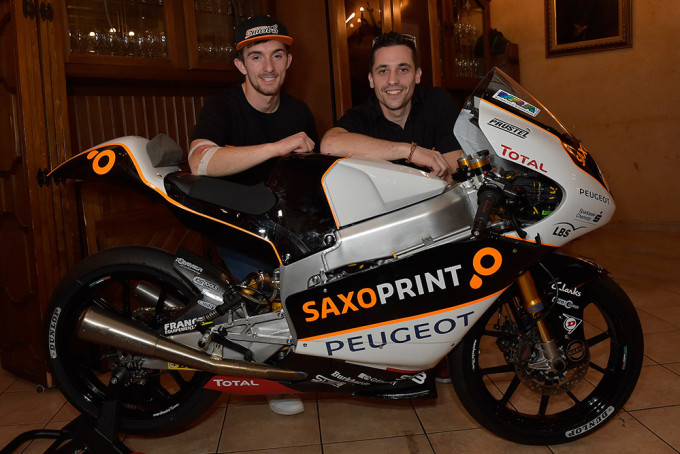 Great weather conditions with bright skies welcomed teams and riders for the first official test in the lower categories this week at the Circuito de Jerez, but all eyes were set to an ambitious new project in the Moto3TM class. A famous as well very successful brand in past racing accompanies the new entry as Peugeot Motocycles Saxoprint look forward to a big challenge in this year’s championship.

The charming location at Venta Don Pepe, located at the outskirts of Jerez de la Frontera, hosted the team launch on Wednesday evening. Alongside young Briton John McPhee and teammate Alexis Masbou, who both will represent the Peugeot colors in 2016, all team members were on stage to unveil the all-new Peugeot Moto3 machine. Expectations are high as the French brand has a long and successful history in two wheel racing early in the last century.

Peugeot Motocycles Saxoprint prepares for their debut season with a three-day test this week in Jerez, before heading to Qatar for the final pre-season test at the Losail International Circuit in one weeks’ time. The same circuit hosts the opening round of the 18 races including Moto3TM World Championship starting on March 20th.

#17 John McPhee:
“The new Peugeot challenge is one I’m really excited about and I really look forward to tackling it in the best possible way. But for the moment I’m excited to arrive with this all-new bike in Qatar, to see where we are in the standings. Since the start of this project the entire team is working so hard and we use every single opportunity to try to understand the chassis and to understand the bike in general from the first outing one week ago. The Peugeot Moto3 is a really nice bike to ride and we’re already able to make progress. The Chassis feels really good and the engine has improved from last year. Lap by lap we’re learning though of course it’s still a long process over the next tests till the opening round of the championship, but I think we can find ourselves in a good position going to Qatar.“

Terrell THIEN (Team manager):
“We’re glad to be able to welcome such prestigious partners as the likes of Peugeot and Saxoprint for this completely new project so a big thank you to both companies and also to all of our sponsor who support us also in the future. We started really late last November to build up a completely new World Championship team and after a long and busy winter it was a relief for all of us to finally see our team on track for the very first time during testing at the Circuito de Jerez last week. This two-day testing wase our roll-out with the all- new Peugeot Moto3 and it was so nice to see that everything went according to our and the factory’s plans without any big technical troubles. Both our riders, Alexis and John, as well the entire crew settled well in this short time since we started our project as well the new mechanics familiarized quickly in their new environment. Beyond that I would like to express my gratefulness to all the engineers in Mahindra which give us such a great support and it is a welcome collaboration with them. This week’s testing went well thus far so from this point of view we completed the very first step in a successful way, everything looks very promising so we’re looking forward to a great debut season for Peugeot Motocycles Saxoprint.“

Enrico PELLEGRINO (Peugeot Motorcycles, Project Director Moto3):
“We’re so proud to announce that Peugeot is back in motorcycle racing. Peugeot has such a great history in this sport – racing is a big part of its DNA. Peugeot is the oldest two wheel manufacturer in the world as we started back in the late 1800s. With racing we started in the early 1900s actually, at the beginning of the last century. We won many, many races as the likes of Bol d’Or, the Nations Grand Prix of Monza for example. Apart of that we set many world speed records so you can see it’s really part of our DNA. Racing has many values belongs to Peugeot, particularly to Peugeot Motorcycles. So according to this, the best way to make our brand a lot more popular around the world, particularly to young people who are our future costumers, is to compete on highest level in motorcycle racing as the highly competitive Moto3 class underlines. Of course our expectations are high but for our debut season the primary target is to learn, just to learn as we’re at the beginning in this project. For sure we have a strong team, at first with our team manager in the person of Terrell Thien. He has so much experience in this business but also with Alexis Masbou, a strong and experienced participant in the world champion, and John McPhee, a very talented young rider, our rider line-up is a strong and promising one. After many years of absence in racing we of course must first understand this category but our decision is based on a long-term project in world championship which hopefully will bring back a lot of success like in the past. Of course our main target is to win the championship, let me say in two, three years we will know more. But for the moment it’s fantastic for Peugeot to compete with incredible brands such the likes of Honda and KTM and to be able to underline Peugeot technology as well the challenge of speed, Peugeot is capable to demonstrate this against the best manufacturers in the world. We did a great job during the winter month so we now look forward to tackle this challenge from the very first race in two weeks.“