John prepared for first Qualifying of the season 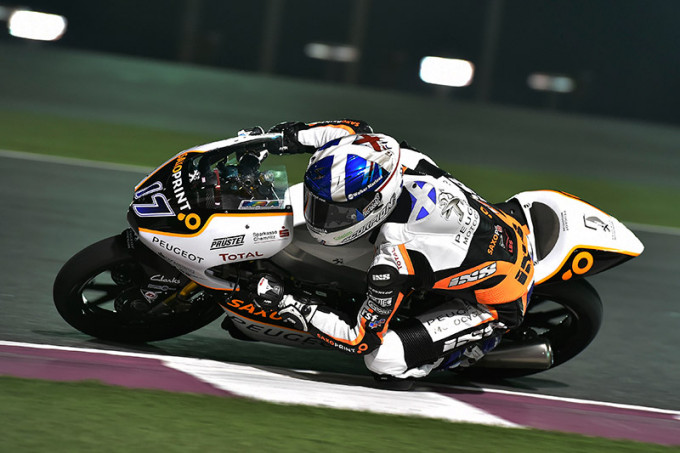 With just a couple of days after the last opportunity to do some more season preparations last weekend at the same circuit, the opening round of this year’s FIM Moto3™ World Championship got underway Thursday evening in Qatar.

The floodlit 5.4 kilometres track in the desert close to Doha offers an amazing scenery to start racing long ago. Conditions were good during all three free practice session so for this the pace was already incredible fast before the real time attack starts with Saturday evening’s qualifying practice.

The Grand Prix of Qatar is the very first opportunity for the ambitious project of Peugeot Motocycle SAXOPRINT to compete in Moto3 category during a race weekend. After a tough winter time in order to build up new structures in a short time which is also the case for the French manufacturer’s all-new Moto3 bike. For this a not easy going start into the season was to expect as the first practice sessions has proved this way.

John McPhee had to start from scratch after the team build up a completely new chassis for the Scotish rider. John was able to show his and the bike’s potential although he suffered bad luck during Friday evening’s session when he crashed due to a collision with another rider.

Very valuable track time was lost but he got back his feeling with the bike immediately even though McPhee was out on track for just two laps in the later stage of FP3.

#17 John McPHEE – P27 (2´07.621 (6/12, FP2):
“Yesterday the first session for me was like I just arrived to ride this bike for the very first time. After the test we changed the chassis and finally we realized that we had a big problem during all the testing with the chassis that something was not correct. So the first day of practice was like day one in 2016 because we started from scratch, testing the new chassis and try to improve straight away. I’m happy with the progress we made even though the position was not so good. But we made steps to become faster and more comfortable. I finished yesterday feeling quite positive because I knew we made good steps forward. So for today everything looks positive to improve the lap times but in the early stage I was a bit unlucky when another rider hit me from behind. So for this we lost most of the session but thanks to my mechanics I was able continue even it was just for two laps at the end. Anyway, my guys did an outstanding job to fix the bike in time and I had the same feeling like before the crash. Even though we didn’t so many laps today but the time is the same like yesterday which was easy to achieve. I’m more or less happy with the bike but most important we’re well prepared for tomorrow’s qualifying practice.”