Gearbox issues put paid to points in Texas for John 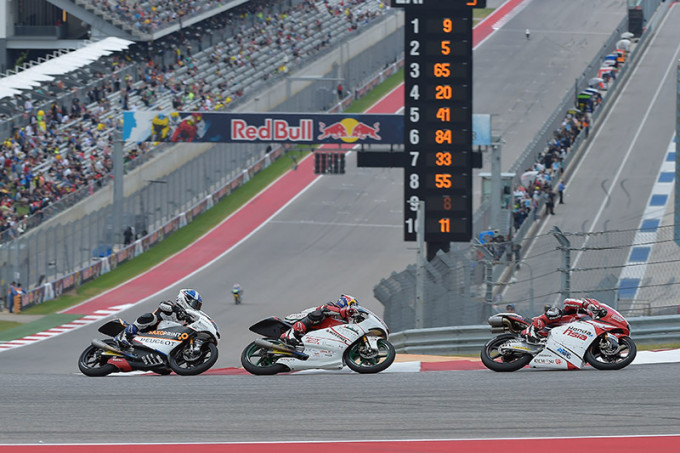 John McPhee endured a frustrating and ultimately fruitless race in the Americas GP due to niggling gearbox issues.

Race start for round three at the amazing Circuit of The Americas was delayed by 15 minutes due to an oil spillage on track, but the weather remained stable and dry despite a cloudy sky today in Austin.

Both riders in Peugeot Motocycles SAXOPRINT, Alexis Masbou and John McPhee, were very eager to repeat last Sunday’s first points scoring finish in Argentina somehow for the team as they left the line in a decent way from 15th and 17th spot on the grid respectively.

Both got a good start but whilst French rider Masbou settled well inside the group fighting for the last points scoring positions till he made a mistake, John McPhee’s race was destroyed early due to the shifting issues.

After 18 demanding laps at the 5.5 kilometres long track in Austin, John finished in 21st position.

The newly formed squad now heads back to Europe with the hope for a further update in terms of technical side for the upcoming round in two weeks time in Spain.

#17 John McPHEE – 21th (World Championship position13th, 9 points):
“It was definitely not an easy race for me. I got a decent start and I already managed to get the front of my group but of course it was just the chasing group. From the first laps I had massive problems with the gearbox. For this reason, the race was really difficult because I felt my riding was not so bad and I could run the pace to go with the guys like Alexis and the others at least. But for minimum 15 times I took neutral and the gearbox jumped out many times so it was really difficult and quite dangerous at the same time because I nearly crashed many times due to this. We know that Peugeot and Mahindra are working hard to improve this and I hope we come back stronger and be in the points once again in Jerez.”