Positive signs for John McPhee as Jerez gets underway 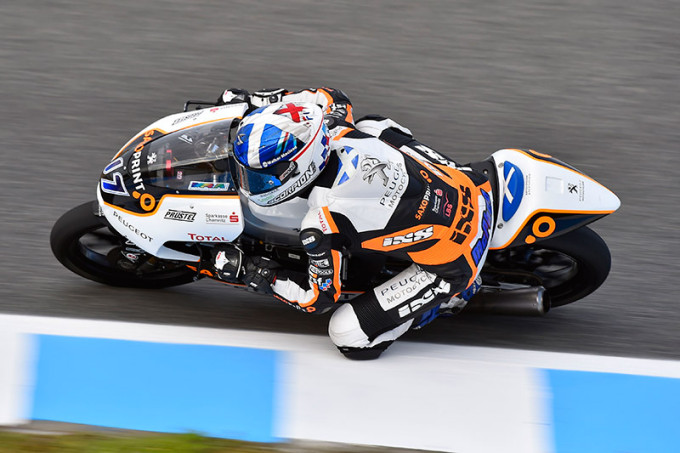 Round four of the season which marks at the same time the first Grand Prix on European soil got underway on Friday at the world famous Circuito de Jerez. Conditions were good all day long even though temperatures were relatively cool this morning.

Whilst Masbou and his team mate McPhee from Scotland endured some issues during today’s first session both made significant steps forward in the afternoon after their crews put in a new tyre respectively. But Masbou already felt confident from the very first laps whereas John McPhee’s hopes for a faultless run were hampered by gearbox issues again.

However, thanks to the encouraging efforts from the team’s technicians as well as by the engineers in Mahindra and Peugeot, things went even better after the break between FP1 and FP2 so at halfway point of the session both riders were able to set lap times which were good enough for top 10 positions at this point. Moto3 action to continue on Saturday with the third free practice as final preparation for the timed session, which will decide the starting grid. But after today’s good signs, Peugeot Motocycles SAXOPRINT aims high for the all-important qualifying practice.

#17 John McPHEE
(FP1: P30 – 1´50.436 (17/17) / FP2: P17 – 1´48.427 (8/14)):
“After today I’m feeling more happy with the progress we made. However, during the first session I still struggled a lot with the gearbox but the team, Mahindra and Peugeot all worked hard to develop something for the races and obviously it seems that everything works correctly so far. In the afternoon I managed to make some good lap times and when we put in a new tyre at halfway point of the session, I made a big step. So for this I’m really happy as we’re not so far from the front. Overall, I felt as strong as I didn’t feel all season long thus far. I hope we can continue in this good way and tomorrow we will achieve a strong qualifying result too.”