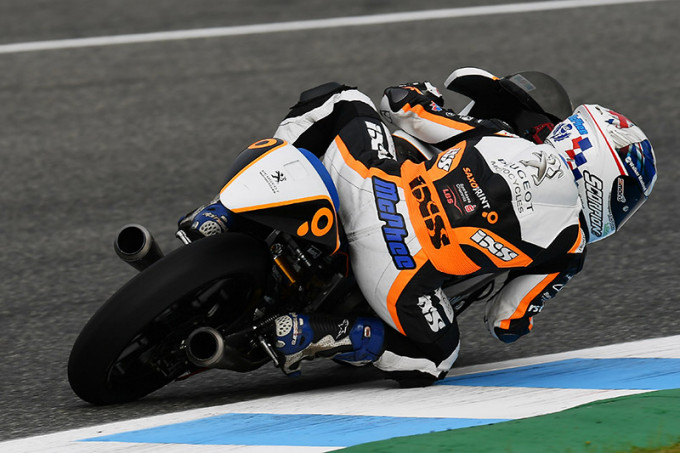 Stable weather but with slightly cooler temperatures than the previous day didn’t affect qualifying practice for tomorrow’s round four, the Gran Premio de Espana though it took time till lunch time to see the sun making its way through some cloudy skies this morning.

After an encouraging start into the weekend with strong performances set by the team’s rider line-up with experienced Frenchman Alexis Masbou and young talented John McPhee from Scotland during yesterday’s second free practice, the team endured a setback today as apparently gearbox issues hampered both riders to improve their level.

On the team’s side in the garage of John McPhee, he and his crew were able to make the next step in respect to the bike’s setting. But at the same time the niggling gearbox issues appeared again even though thanks to the hard work of the entire stuff involved in this project could fix it mostly whilst his team mate Masbou endured a disappointing session this afternoon at all. John qualified for P25 on the grid whilst teammate Masbou will start from P30.

Starting time for the Moto3™ Gran Premio de Espana is scheduled for Sunday 11:00am and John will never give up his hopes to better the situation with a strong result in the race.

#17 John McPHEE, Grid position 25th – 1´47.746 (13/14):
“From FP3 this morning to qualifying practice we managed to improve the bike’s setting a lot. I think we came in the best direction we had overall thus far. Anyway, free practice three was really difficult because again we had some problems with the gearbox it was difficult to ride. But thanks to my guys, which were working so hard, we were able to fix it more or less for qualifying. Obviously, the position doesn’t match that I wanted to end up. I struggled to get in a good position in the end but I was riding as hard as possible and I did everything I can. So for tomorrow if I’ll leave the line in a great way I can have a good race too.”