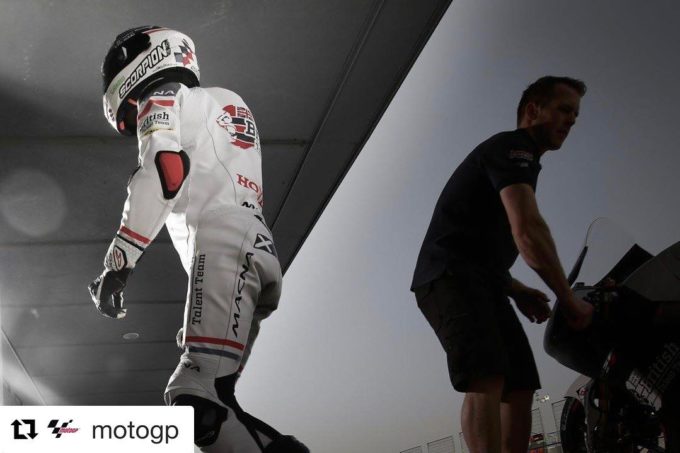 That’s us had our final private test of the season, this time being at Jerez. It was a joint Moto3/moto2 test with quite a few teams running again. Day one was another really positive day! The weather was good and I managed to get in 57 valuable laps during the day. Once again the bike felt good from the start. I focused mainly on my riding and adapting into the bike a little better. We tried some subtle setting changes to get a feel for what worked and also what didn’t and managed to pick up some good information over the day.

Unfortunately the weather changed overnight and the rain came in. Worse than that as it was blowing up from the direction of the Sahara and it brought sand in with it. So the circuit was left in poor condition with this all over it and most riders didn’t bother going out. Those who did were far off the pace and reported back that it really wasn’t worthwhile. We sat it out and by early afternoon decided to pack up and head home. It was a shame as another day would’ve been useful as the more pre-season testing we can do the better prepared I’ll be arriving at the first race. But, as we didn’t head out on track at all, we didn’t waste one of our allocated days and can use it again later in the year.

Whilst in Jerez the fully liveried fairings were delivered and fitted. This was the first time I’ve seen the bike in it’s true colours and it looks brilliant! Plain but effective and will definitely stand out on track.

After leaving Jerez I’ve had a good weekend riding motocross and supermoto. Managed to get some miles in on the bicycle this morning too before heading for the airport this afternoon.

We now have an official team launch in London tomorrow where I’ll be meeting some of the press, doing interviews and some photo shoots. You’ll get a chance then to see then how the bike looks. I’ll be posting pictures up on my sites so keep an eye out!