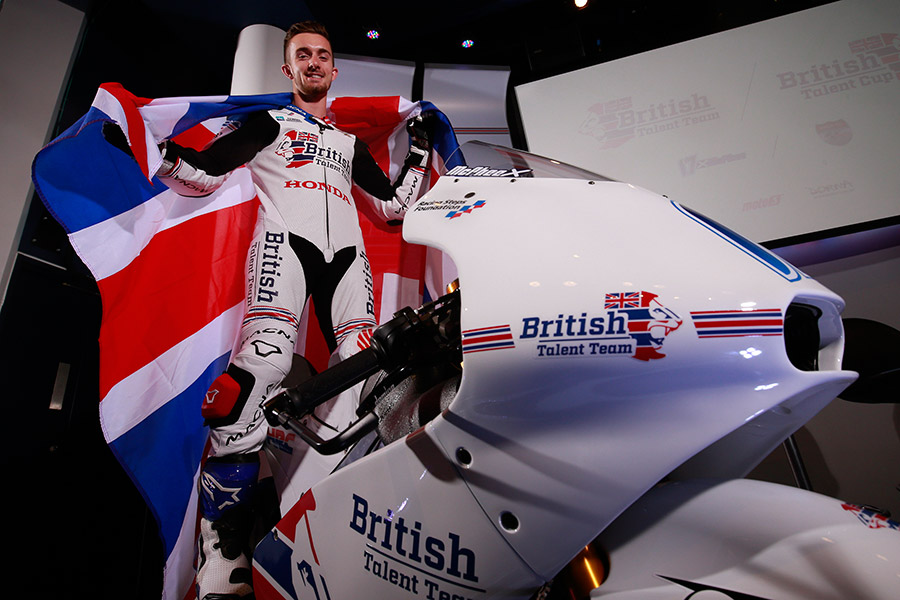 The launch sets in motion both the new British Talent Team and the British Talent Cup; Dorna’s commitment to the future of motorcycle racing in the UK and British Isles.

The new British Talent Cup is designed as the perfect stepping-stone for riders from the British Isles to get onto the world stage, providing an opportunity like no other for young talent to grow and progress on the Road to MotoGP™. Races will take place at existing Dorna-run events – such as MotoGP™ and MOTUL FIM Superbike World Championship weekends – and the riders will race on Honda Moto3™ machinery. The British Talent Team is the presence of this project on the world stage, in the FIM Moto3™ World Championship – the last stop on the Road to MotoGP™ that begins, for these riders, in the British Talent Cup.

Dorna has been deeply involved in young rider programs since before the turn of the millennium, beginning with the FIM CEV Repsol and the Movistar Junior Cup – then going on to include initiatives such as the Asia Talent Cup and the Red Bull MotoGP Rookies Cup. The Red Bull MotoGP Rookies Cup began in 2007, creating and continuing to create riders of incredible caliber like Johann Zarco, twice Moto2™ World Champion, and Brad Binder, reigning Moto3™ World Champion, who have joined FIM CEV Repsol graduates and subsequent World Champions such as Marc Marquez and Maverick Viñales on the list of young rider successes to have come from these initiatives. More recently, the Asia Talent Cup was born in 2014 and is now beginning to see Champions such as Ayumu Sasaki emerge onto the world stage – the 2015 ATC Champion and 2016 Red Bull Rookies Cup Champion debuts in the Moto3™ World Championship in 2017.

The British Talent Cup is the latest addition to this honour roll of young rider support and talent promotion, with selection set to take place in 2017 and the engines ready to fire up next year. Designed to develop British riders who would otherwise struggle to gain an opportunity to showcase their talent, the Cup will race at Dorna-run events including the UK Round of WorldSBK at Donington Park and the British GP at Silverstone. A range of circuits in the UK and Spain form a tentative base for the proposed calendar, and the bike will be a Honda NSF 250R Moto3 machine. Riders coming through the new Cup also have the incentive of seeing the British Talent Team in Moto3™, knowing there is a program designed around their journey to the FIM World Championship with Dorna supporting British talent on every rung of the ladder.

The first ever selection program for the Cup will preface the 2017 British Grand Prix at Silverstone, in the week leading up to the event. There, prospective riders will be put through their paces and the best offered the chance to race in the Cup’s inaugural 2018 season. Then riders are on the Road to MotoGP™ – with the ladder to the top waiting to be climbed. The application process runs from the 5th May to 18th June, and riders who will be invited to the selection process will be informed before the 21st July.

Onboard with the Team and Cup will be the experience of Jeremy McWilliams as British Talent Scout and Alberto Puig as Talent Promotion Director. British two-wheeled legend McWilliams adds his experience to the project in helping to find and develop these riders of the future, with Puig bringing his knowledge and experience from the Idemitsu Asia Talent Cup – as well as a long career guiding talents such as Dani Pedrosa and Casey Stoner on their paths to World Championship glory.

With a long and distinguished history in motorsport, the British Isles are the perfect place for Dorna to take another step forward in their ongoing investment in the future: the British Talent Cup.

John McPhee
“I’m really happy to have this opportunity in the team and I’m looking forward to the season to see what we can do. Representing the UK and British Isles on the world stage, as well as the Team and Cup, is a big responsibility but I’ll work hard to get the kind of results we’re aiming for – and get this new project off to the best start. Thanks to everyone for the opportunity – and now I’m just looking forward to getting out and racing!”