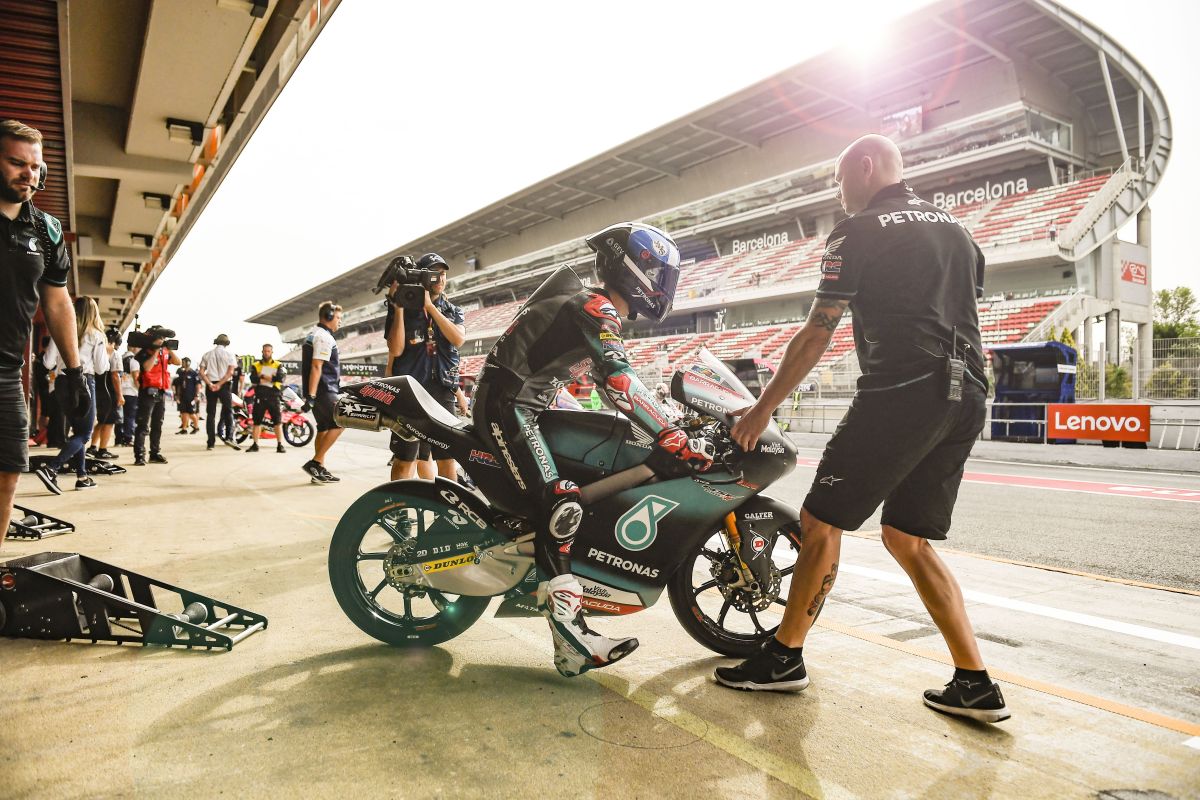 The Catalan GP began in difficult fashion for PETRONAS Sprinta Racing riders John McPhee and Ayumu Sasaki, who ended Friday outside of the Q2 spots in 16th and 27th, respectively. Both riders were caught out by rainfall in the final minutes of FP2, hindering their attempts at improving their lap times on their last run of the day at the Barcelona-Catalunya Circuit.

In the morning, on a dry track, John worked to find a good race pace by putting in 11 consecutive laps on his first run. The Briton finished FP1 in tenth place, with a best time of 1min 49.836secs.

The Moto3 riders had been preparing for a fast final few minutes in FP2, but some unexpected rain put paid to that plan. John finished the session in 20th place, with a best time of 1min 50.228secs, and was 16th fastest overall.

John and teammate Sasaki will have another 40 minutes in FP3 on Saturday in which to make the cut for Q2 directly. Qualifying will be held at 12.35pm (Q1) and 1:00pm (Q2) local time.

#17 John McPhee
“The opening day has been interesting. The conditions were tough for everyone, because the heavy rain at the beginning of the week made the surface dirty. It improved in FP1 and we expected FP2 to be even better, but in that session the conditions remained difficult. In FP1 I finished 10th and I was happy with that, because I was able to ride alone and I felt good on the bike.
In FP2 we focused on doing a long run of many laps on the same tyres. First I made a race simulation with one tyre, then another with another set. Then we entered the pits to put on a new tyre for the last 10 minutes, in order to climb the timesheets, but unfortunately it started to rain. Today doesn’t seem fantastic at first glance, but my feeling on the bike is good and everything is working well.
Tomorrow we will have good weather and I think I can be strong. The main objective for FP3 is to get into Q2, but we know that if we have to go through Q1 it isn’t the end of the world. We have the necessary tyre to set the required lap time in FP3. I know I can be quick, since I have the reference point of the test, so I think tomorrow could be a great day.”