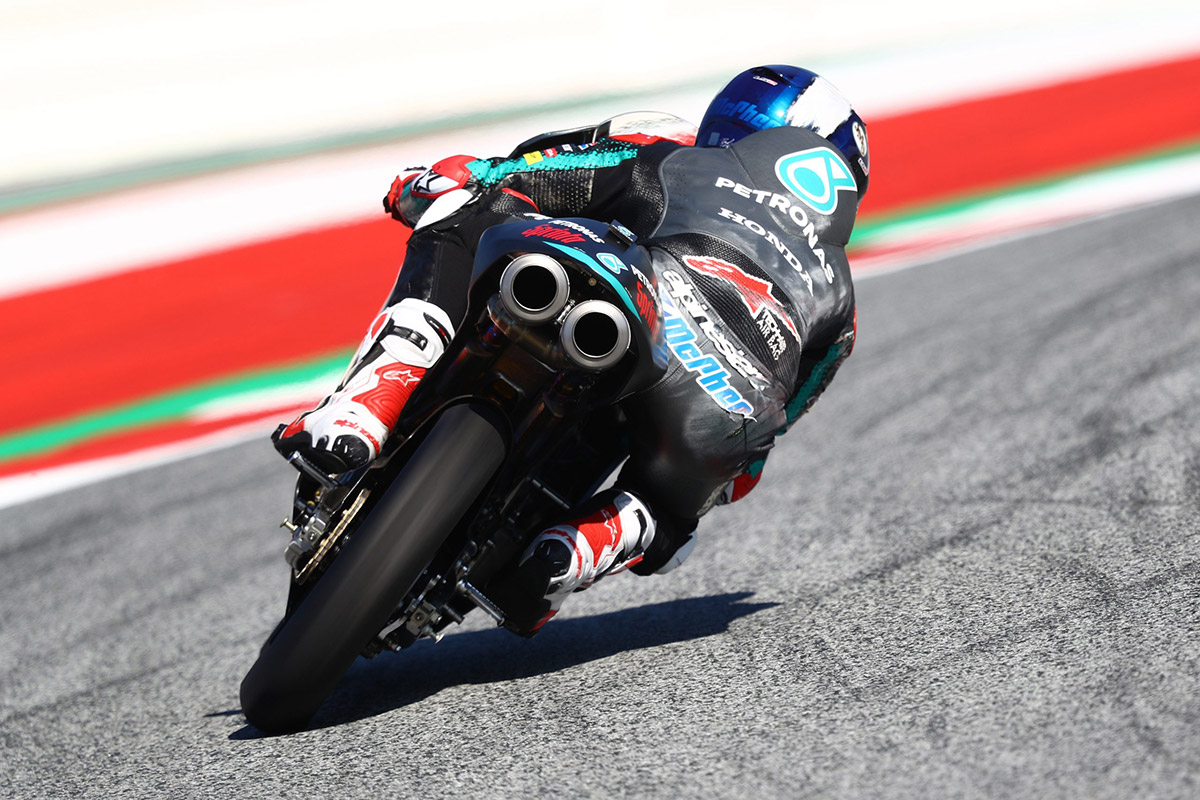 John McPhee ended the first day of the Grand Prix of Styria within the top 10 positions of the combined times for the two practice sessions. The Scot’s good form also saw him finish FP2 in fourth, as the sun helped to raise track temperatures to 51C.

The first flying lap for John in FP1 came to an early end after the Scot lost the front end of the bike in the last corner, forcing a return to the pit garage. During this time, minor changes were made to the set-up to further improve the handling around the 4.3km Austrian circuit. The end of the session saw most riders complete a series of flying laps, including John, who made his way up to fourth when he headed back out. His final laps were hampered by yellow flags out on track, which left McPhee 11th at the chequered flag, having set a best time of 1min 36.861secs.

Back into his rhythm in the second practice session, John joined the bunched field to set a time that put him fourth in the early minutes. Increased track temperatures due to the Styrian sun made it difficult for riders to improve upon their morning times. John made more progress aboard his Honda NSF250RW throughout the session, before heading back to his garage to wait for the closing moments of FP2. With the slipstream so important at the Austrian circuit, the final minutes saw a surge of riders heading out for one final flying lap. The Scot managed to improve upon his morning time to set a 1min 36.552secs lap, which placed him fourth in session and eighth overall.

The third and final practice session for John starts at 9am local time (3pm MYT) tomorrow, with the first qualifying session due to get underway at 12.35pm local time (6.35pm MYT).

We made a couple of small adjustments to the bike, but it’s more or less the same as we rode it last Sunday. Overall it’s been a productive day. Starting Free Practice 1 with a crash was not good, as it meant we had to do a little bit of catching up and we finished P11. FP2 we managed to find the rhythm again and worked a lot with the used tyre. I ended up P4, so we’re back on track with where we wanted to be. There are a couple of small things we want to improve for tomorrow, but I feel like we are in a good position overall. Like always, the front two rows are the target on Saturday. Like we saw last week, it’s good to start on the front row as it means we’re out of trouble at the beginning of the race. It becomes a bunched pack anyway, but being out front it gives you the greater chance of staying there.